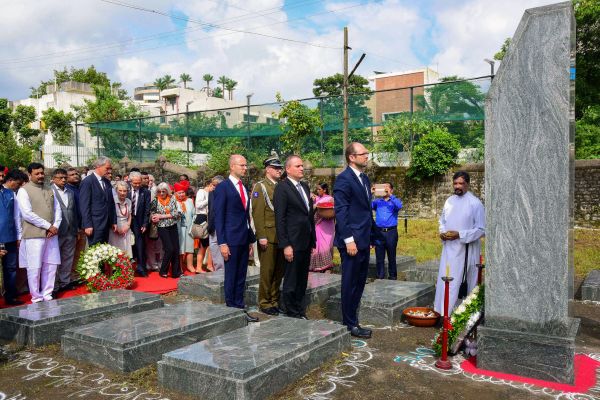 Eighty years after the outbreak of World War II, thousands of persecuted Polish refugees – who had escaped from concentration camps in Russia and Germany – finally got a refuge in Valivade village, Kolhapur which they had made their new home for several years.
On Saturday, Poland’s Deputy Foreign Minister Marcin Przydacz unveiled a “Memorial Pillar” in memory of those Poles who were welcomed and given shelter in the erstwhile kingdoms of Kolhapur and Jamnagar – in then Bombay Province – now in Maharashtra and Gujarat respectively.

The Memorial Pillar has come up at the tiny Valivade village near modern-day Kolhapur town, where over 5,000 Poles had lived, integrated, worked for several years before returning to their motherland.

Most refugees reached India via the land or sea routes – in trucks from Ashkhabad in the erstwhile USSR travelling via Afghanistan – and from USSR to Iran after two major evacuations of the Polish Army through the Caspian Sea in March and August, 1942.
The then Maharaja of Jamnagar, Jam Saheb Digvijaysinhji R. Jadeja (1895-1966) at great risks, welcomed them wholeheartedly into his fold even as the world fought a bitter war and India struggled for Independence from Britain.
He built camps at Balachadi, near his summer palace, on the outskirts of Jamnagar, took full care of them and his small gesture later saw many more thousands of Polish refugees coming not only to India but getting refuge in other countries in the world.

Besides the 1,000 Polish children in Balachadi, later, around the late 1940s, some 5,000 Poles settled in Valivade, near Kolhapur which later became the single biggest Polish settlement in India.
Valivade itself was developed on the lines of a typical independent Polish village where the refugees lived and around 78 people who died were laid to rest in the Polish Cemetery, still present there.


On Saturday, there were loud claps and cheers as 93-year old Danuta Stanislava Pniewska, had a warm and emotional reunion with her childhood hockey playmates — B.S. Shinde, 87, and D.B. Jadhav, 88.
“They pointed out each other in faded yellow photographs of their hockey teams of that era and even playfully argued a bit about their correct identity! It was a poignant sight and will be cherished by the people of Kolhapur for long,” said a local resident Dhananjay Jathar.

Around 20 surviving Poles, who had fled to Valivade as orphaned or half-orphaned children, also attended the event, hugged each other with joy and tears, and later interacted with a few of the Kolhapur seniors whom they had befriended in childhood.
Some of them are — Andrzej Jan Chendynski, Janusz Edward Osinski, Andrzej Jezierski, Krystyna Katarzyna Pietraszko, Wanda Kuras, Wieslaw Haciski, Kazimiera Alina Skorupinska, Danuta Stanislava Pniewska, Izabella Maria Wolff, Krystyna Koziell, Teresa Ewa Labus, Dennis Wypijewski and Ludmila Maria Jakutowicz.
After the Memorial Pillar, there are plans to construct a ‘Memorial Museum’ for the Poles here.
“Let the Memorial Museum be a place where everyone can be enriched by the love and humanity shown to the Polish by the people of Kolhapur. I thank the Poles In India for keeping the memories alive,” said Przydacz.
“The ‘Little Poland’, while maintaining its distinct identity, coalesced with the local culture and community. I was pleasantly surprised when a Polish parliamentarian addressed me as ‘Maharaj’. The Memorial Museum being set up will keep those memories alive,” said Sambhajiraje Chhatrapati, Rajya Sabha MP and 13th direct descendent of Chhatrapati Shivaji Maharaj.

Even the Poles – after returning home – did not forget their generous Indian hosts and the Association of Poles (here) erected an obelisk at the Mahavir Garden Park in Kolhapur with an eagle at the top.
In 2011, Poland conferred the “Commander’s Cross of the Order of Merit of the Polish Republic” on Maharaja Jam Saheb Digvijaysinhji R. Jadeja posthumously, at least six public and private schools are named after him in Warsaw, while a prominent junction in the capital’s Ochota district is dedicated as “The Square of the Good Maharaja” with his statue in 2013.
The Maharaja’s contributions were immortalized in an Indo-Polish co-production film, “A Little Poland In India” (2013), depicting him as the lone crusader who safeguarded the lives and future of thousands of orphaned Polish children who sought refuge during the dark days of WW-II.
After the WW-II when the situation normalized, a majority of those children returned to Poland and others to different countries globally.
However, many – now in their 90s or above – keep returning to Valivade and Jamnagar to relive the fond memories of those years they spent here.
IANS
- Advertisement -
Share
WhatsApp
Facebook
Twitter
Linkedin
Previous article'Gangs Of Wasseypur' only Indian film in 'The Guardian' Best 100 list
Next articleIndia to offer 1,000 PhD fellowships to ASEAN students at IITs