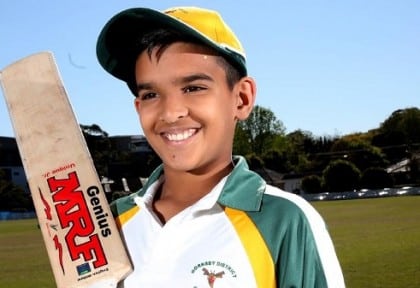 If his current success is a sign of things to come, 11-year-old Vansh Bhatia will give us a cricketing legend. A Year 6 student at Waitara Public School, Vansh loves cricket and has been playing since he was five. He was recently chosen to represent the Sydney North team at the upcoming New South Wales Primary Schools Sports Association (NSWPSSA) State Championships. The tournament will be played from 21-24 November on various grounds in Sutherland and is hosted by Sydney East School Sports Association.

Vansh is an avid sportsman who is a part of the school cricket and soccer teams. He was one of three students selected from his school, out of around 40 students, to represent the Hornsby zone in cricket. On passing four trials he made it through to compete in the State Championship.
In all, thirteen teams comprising of around 160 children from various zones will be participating in the tournament. The one-day matches will see teams pitted against one another to vie for the first position. The players who succeed in the State Championship will make up the NSWPSSA Cricket Team which will then compete with their counterparts from other states.

It may seem like a long road, but the systematic screening from a grassroots level is what makes the Australian cricket team one of the best in the world. Only the finest talents reach the top to represent the country in the sport and this rigorous selection process is the key to producing a stellar team.
“I want to be a professional cricketer and play for the great Australian team one day,” Vansh told Indian Link.
To make his ambition a reality he has been working hard to improve his talent from a very young age. He joined the Hornsby District Cricket Club in 2012 where he religiously practices three to four times a week. He is an all-rounder but believes his batting is better than his bowling.
Hailing from a cricketing nation, it comes as no surprise that Vansh’s father is an avid cricketer and has been encouraging his son to develop his skills.
“My favourite cricket team is India and Virat Kohli is the best player in the world,” Vansh said.

This budding cricketer has been chosen to play in Rep Cricket for Hornsby district for the last two years and has been bringing home trophies to justify his selection.
Vansh said his teachers and friends were “surprised and very happy” at his selection to play in the NSWPSSA State Championship and everyone is very supportive of him. He will take time off from school to participate in the four-day tournament. His family and friends will go along to encourage him.
Vansh’s mum, Shashi is elated at her son’s success. “I wanted the Indian community to know that we got this wonderful opportunity for which we are very grateful,” she said. “It goes on to show that there is no partiality in Australia where this sport is concerned. Whoever has the talent will have the chance to prove it. For us it is very heartening.”

In a message to other parents Shashi stressed, “If your child has a talent or special interest, encourage them and help them achieve their goals. Many a time their success will depend on luck, but as parents we must make sure that we provide them with opportunities to realise their dreams.”
When asked if he had a message for other children his age, interested in playing cricket, Vansh simply said, “Just enjoy the game.”
Even at the tender age of eleven, Vansh comes across as a dedicated player who is interested in improving his performance through hard work and perseverance. Indian Link wishes him great success in his upcoming tournament.
Go forth and conquer little master, the whole community is rooting for you!