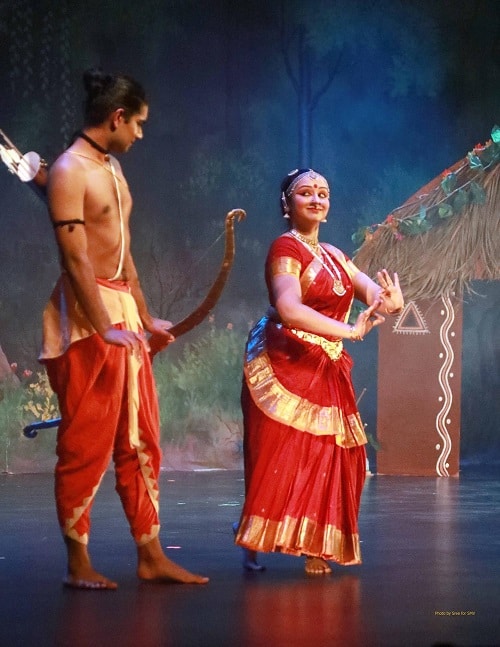 Reading Time: 3 minutesA Ramayana-inspired dance drama in Perth seeks to humanise the mythological demon king.
Since childhood, we have heard, read and chanted Ramayana in which Rama, the paragon of perfection, has been the protagonist, and Ravana, the demon king, is the villain.

Most humans, however, are neither Rama nor Ravana, but creatures that inhabit the grey landscape somewhere in between.
It was this duality that I am Ravana, Saraswati Mahavidhyalaya’s latest dance drama, explored. The performances ran at the Stage Theatre of WA in Perth between 7 and 10 July, enthralling local audiences.
Saraswati Mahavidhyalaya (SMV) – a brainchild of late Swami Shantanand Saraswati – has a reputation for artistic excellence built assiduously over the years. This time too, they did not let the audience down.
Take, for instance, the surreal use of lighting to create a shimmering river as the boatman Guhan took Rama, Lakshmana and Sita across the river. Or the awe-inspiring Tandava dance of Shiva and Parvathi as they moved with grace in near concentric circles at high speed – how did they manage not to crash into each other! Then there was the foot-tapping music and energy of Hanuman and his monkey army, or even the wonderful sight of Ravana, majestic and yet fatally flawed – SMV’s team nailed it all perfectly.
The production blended languages (English, Tamil, Hindi and Sanskrit), dance forms (Bharatanatyam, Kathak and folk), and music and acting, producing a riveting performance.

While staying true to the story, the production creative in technique. The commentator seemed to pop up in the most unexpected places: at one point trammelling down a prop rope from the upper stalls. The artistes at times entered from within the theatre rather than backstage, engaging the audience intimately. The spirit characters provided an out-of-body commentary on their own inner turmoils and choices.

But, why the title I am Ravana? Sarasa Krishnan, creative director, explained, “Ravana was a great devotee of Shiva, and tuned into the divine, but always in conflict.

All of us have this conflict of Asura and Deva within us.” The play attempted to pique the audience’s curiosity with the bold title, and invite people to see the duality that is at the core of all human kind.

Mathan Rajasingam played Ravana in the drama. An engineer by profession, the first time he was involved in a Ramayana play was as a monkey! He said, “There’s a bit of Ravana and Rama in all of us. In our everyday life, we experience this duality. Ravana was a majestic king, a great Shiva devotee, a colourful character. I was excited to take on this role.”
The drama touched each individual differently. For one person, the silent dialogue between Lakshmana and Sita as she urges him to go after the golden deer was a beautiful moment; for another, the Shiva-Parvathi Tandava dance held a magical moment as Ravana aspires to be like them through dance movements. For someone else, the sight of the monkey army celebrating Rama’s coronation brought out emotion. And for some, the drama raised fleeting introspection of one’s own life karma – am I Rama or Ravana in my choices?