Short film A Little Gardener talks about both Sikh values and the most important environmental issues facing the world today. 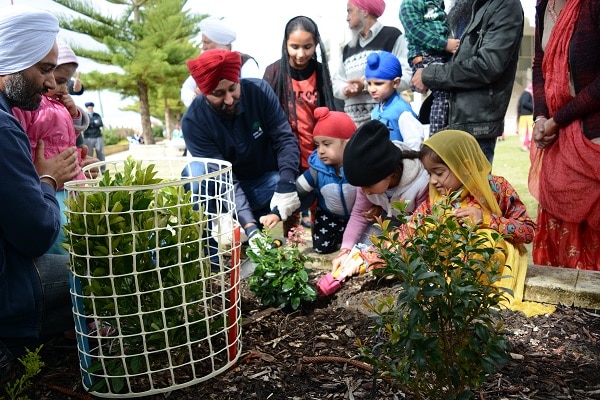 Air is the Guru, water the father, and the earth, the great mother.
These words of Guru Nanak Dev Ji are a great truism in contemporary life – especially as we suffer from a nature-deficit disorder on an individual level, and from climate change on a global level.
A short film on the issue has been taking the Sikh world quite by storm. A Little Gardener, a 35-minute film, has been doing the rounds of Sikh centres the world over. It came to WA recently, thanks to the US-based EcoSikhs and the Sikh Association of WA.
The film’s makers Satdeep Singh and Rachna Kaur Vigaas of Foundation Production, based in Ludhiana Punjab, claim they undertook this project with a dream to sow the seeds of greenery not only into barren lands, but minds as well.
That nature is associated with an enhanced sense of well-being, has been known to man for ages. The therapeutic qualities of nature have now been recorded by science as well. Psychologists claim as well that natural surroundings have restorative properties. This is reflected wonderfully in the film: When you need to meet yourself, nature will help you. This was the deep take home message of the film. (Ten-year-old actor Agamvir Singh impressed in the lead role.)

Many families with young kids were present at the screening at the Sikh gurudwara in Canning vale. It was a lesson in environmental science as efforts were made to explain how the ecosystem works and our own role in it. Appreciably, efforts were also made to understand what our own Sikh scriptures say about the role of nature in our lives. Quoting a few strong verses from Guru Granth Sahib and explaining its meaning was very enlightening.
Baleharee Kudrat Vasiya tells that God lives in nature.
Pathee torai malini, pathee pathee jeo. You tear off the leaves O Gardener, but in each and every leaf there is life.
Nanak sach dataar, sinakhat kudrat. The truthful One is the giver of all, He is revealed through his creation, Nature.
Gurbani advises us to utilise natural resources cautiously. Also, we must be thankful to the Almighty for all the natural resources he has bestowed upon us to make our life easy and comfortable.
The seventh Sikh guru Sri Guru Har Rai Sahib (1630 – 1661) was a nature lover and a great environmentalist. He was instrumental in developing Kiratpur Sahib as a town of gardens, setting up a herbarium (medicinal herb garden) known as Naulakha Bhagh which had rarest of the rare herbs.
EcoSikhs is a mission which brings together Sikh values, beliefs and the most important environmental issues that our world is facing today. The organisation has done wonderful work in Amritsar India, turning public gardens into zero waste places, planting more than 100 banyans for Earth Day 2015, and cleaning the roads after city processions.
After the film screening, a very interesting Q and A session followed for the younger members of the audience – there were prizes in store! A tree plantation drive in the garden area seemed but a natural extension of what they had seen and learnt.