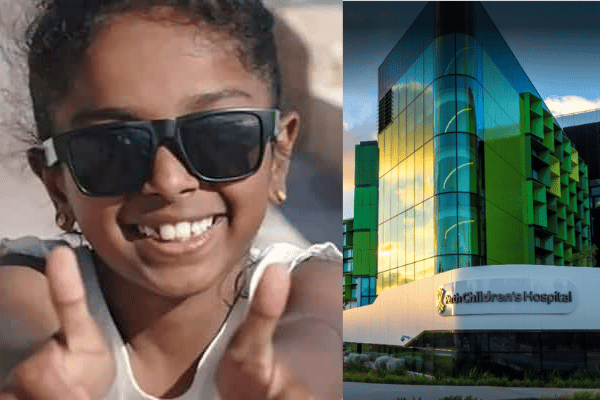 An independent report has been released regarding Aishwarya Aswath, the seven-year-old girl who died after her parents waited two hours for medical treatment at Perth Children’s Hospital.

On Easter Sunday, Aishwarya passed away due to a fatal infection, her condition had deteriorated while her parents made requests to elevate the level of care being given to her.

The independent report by the Australian Commission on Safety and Quality in Health Care has found that, at the time, staffing was “sub-optimal” and nurses “exhausted” at Perth Children’s Hospital (PCH).

Her parents have spoken after the report was released into the tragic incident.

The hospital’s triage and waiting areas were “particularly vulnerable” and a major increase in ED incidents was not met with sufficient urgency, the report found.

On Tuesday Aishwarya’s father, Aswath Chavittupara, said he believed Perth Children’s Hospital was still trying to “defend” itself against accusations of understaffing and sub-par care.

“If they came out with the truth and admit their mistakes, then we can start a new chapter.”

He further stated if any children in their family needed treatment, they would not take them to PCH.

“We wouldn’t feel safe taking our other children there, not at the moment,” he said.

“We are emotionally not in the state to visit PCH.

“We need to build a bit more trust before we can get to that stage.”

The news channel also reported that Health Minister Roger Cook has vowed to do whatever is needed to rebuild trust with parents and health workers, admitting more nurses are proving hard to find. The effects of WA’s pandemic border have been reflected in recruitment.

The independent report found that the collective impact of a large triage area and understaffing at PCH resulted in junior staff being exhausted and unable to take leave.

The damning report into the death of a little girl inside Perth Children's Hospital. @JessicaPage7 #7NEWS pic.twitter.com/GXnCbadGUh

The staff failed to make eye contact with families waiting in the ED, a root cause analysis found.

Aishwarya’s parents want camera footage released that shows them pleading for help five times. The seven-year-old’s triage rating of four was not reviewed for two hours.

Before Aishwarya could receive further treatment, she was rushed into resuscitation in a hypertonic condition, and it was too late.

She had died of multiorgan failure due to sepsis, the coroner confirmed.

To determine what steps might have saved her, and if anyone or any single thing is specifically to blame for Aishwarya’s death, an inquest will be launched.

The report released on Tuesday 9 Nov has exposed PCH bosses, who previously said the emergency department was fully staffed the night Aishwarya died. They have now stated that the roster was inadequate.

In total, 30 recommendations were made by the newly released report, all of which the health department and state government have promised to implement.

Now, Aishwarya’s parents are in the process of creating a public plaque in their daughter’s memory, 7NEWS reported.

“We will love and miss Aishwarya for the rest of our lives,” her father said on Tuesday.