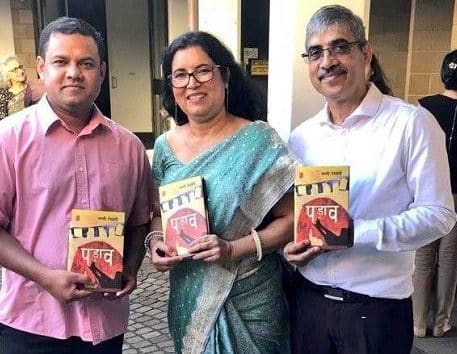 In something that will undoubtedly make Indians in Australia proud, probably the very first Hindi novel written in Australia was launched in Western Australia on 27 January.
Padaav (the leg of a journey), authored by Success WA resident Laxmi Tiwari, was unveiled in the presence of Consul General of India in Perth Amit Mishra. Laxmi has been living in Australia for the past three decades but with this novel, she has paid a tribute to her Indian roots.
The novel, set in a village, talks about antiquated customs still prevalent in modern-day India and other contemporary issues facing the country and its citizens. Although a fiction, it picks up real-life instances to create a very relatable narrative.
The writing conjures up visions of the Himalayas, rivers, grasslands, cattle, beautiful farms and villagers, instantly transporting the reader back to India. While the setting is idyllic, the story talks about protagonist Gautama as she navigates some social evils that were once part of Indian society. The plot sheds light in some dark spots from India’s past, particularly in rural areas, such as child marriage, the feudal system and the tendency of traditional zamindars to usurp land. The story also tackles issues which are not limited to the village but towards the whole nation. The source of inspiration can be tracked to the bold writing style of Munshi Premchand, which was also acknowledged by the author at the launch event. Women of all ages can relate to the story presented in the novel, which Laxmi said couldn’t have been possible without the support of her family.

In her brief address, the author thanked the audience, readers, her close friends Ratna and Suman, brother Brij Mohan, her husband Ravi Prakash Tiwari and her family who supported her endeavour and encouraged her to fulfil her literary potential.
Laxmi’s daughter and husband also addressed the audience on the occasion, talking about Laxmi’s gifted narrative skills. Ravi Prakash recalled an incident from a few years ago when Laxmi and their daughter were driving to Murdoch university from Bibra lake and suddenly a snake crossed their path. “I remember our daughter telling me about the incident later in the evening, but the way Laxmi vividly described it – in great detail and with a lot of flair – was memorable. I was impressed by her story-telling skills. We were always aware of her potential and encouraged her to nurture it,” he said.

The novel has received positive reviews from many newspapers and authors in India and elsewhere in the world. Praise for the novel continued at the launch event as well, with many from the audience sharing their appreciation for the work.
Laxmi also read a paragraph from the novel. The warm applause it elicited proved that Laxmi’s labour had been worth it.