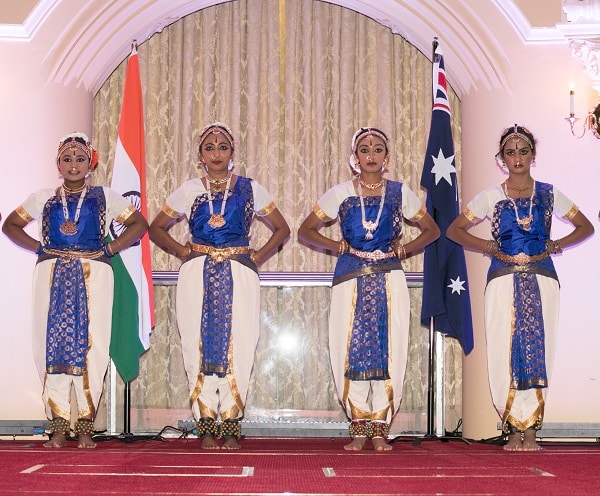 The Consulate General of India in Perth organised not one but two remarkable celebrations of India’s 71st Independence Day this year. These included the flag hoisting at the Consulate’s own premises in the morning, and a gala cocktail event in the evening.
The first was the annual flog hoisting in the morning, which many community members like to attend regularly. This time round, some 150 people turned up. Consul General Amit Kumar Mishra unfurled the beloved tiranga and the congregation sang the national anthem with much pride. He then read out the President Ram Nath Kovind’s message to the community, in which the new Head of State urged all Indians to work with the sense of unity, purpose and selflessness. He elaborated on the concurrent focus of the Indian Government with the Indian community abroad to strengthen the connection and also mentioned a few recent initiatives.

These included programmes of development like Swachh Bharat; building or helping build toilets to make India open-defecation free; promoting Beti Bachao, Beti Padhao to ensure our daughters are not discriminated; demonetisation; pushing transparency and eliminating corruption in public recruitment and procurement, and implementing GST to eliminate multiple taxes and simplify transactions.
The Consul General invited the Perth-based Indian community to join hands in achieving Prime Minister’s vision of “New India by 2022”. He also stated Consulate’s efforts to broaden and thickening of the bond with the Indian community in Perth.

The dignitaries attending the event included two Indian-origin members of Western Australia Parliament, Yaz Mubarakai MLA and Kevin J Michel MLA, and Mayor of Cockburn city, Logan K. Howlett.
Both parliamentarians spoke at the event highlighting their journey from India to Western Australia’s Parliament. They promised to work for the betterment of the Indian community in the state and to strengthen India-Western Australia engagement.

Indian organisations active in Perth presented a cultural performance with patriotic songs. Refreshments were served as morning tea.
The evening reception was held on 16 August at The Government House Ballroom. It was a gala ceremony attended by some 200 high-profile guests and friends of India in the wider community. The Governor of Western Australia Kerry Sanderson AC, Premier Mark McGowan, Chief Justice Wayne Martin AC, and the Lord Mayor of the City of Perth Lisa Sacffidi were main guests, each  giving powerful speeches.

The Minister for Tourism, Citizenship and Multicultural Interests Paul Papalia CSC MLA, and the Minister for Mines and Petroleum Mr Bill Johnston also were in attendance, along with Tony Krsticevic MLA, who represented the Leader of the Opposition. Other attendees included political leaders, WA officials, academicians, businessmen, media persons, members of Consular corps, and representatives of Indian community organisations.
Artists from Chennai School of Dance and Narthanalaya School of Indian Classical Dance presented fusion dance and Bharatnatyam.
It was great to see the interest in India in the mainstream, not only at the political and diplomatic levels but also at personal levels, including the manner with which India has been able to reach out with its soft power.