The human cost of migration 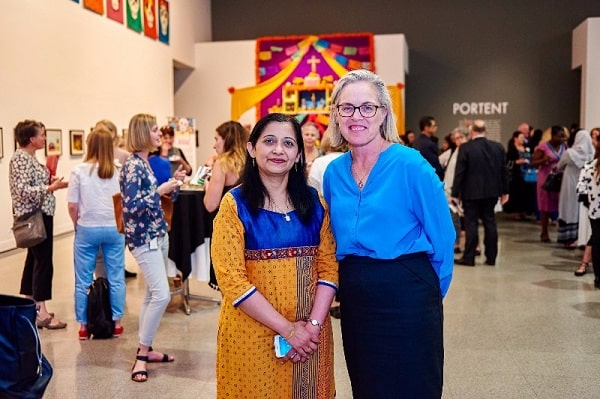 Reading Time: 4 minutesThe massive surge in global migration is considered by many to be the most defining feature of the last decade.
Whether it is due to economic conditions, disasters or conflict, global migration remains one of the most politically challenging and divisive issues of our time.
New research led by Professor Jaya Dantas, from the Curtin University Faculty of Health Sciences, explored key issues in relation to refugee students and women, as well as the health and well-being of skilled migrants through the launch of three distinct studies.
The first of these, (Re)claiming Social Capital, focussed on improving pathways for refugee students into Australian Higher Education.
Of the 22.5 million refugees (2016) worldwide, 51% are under the age of 18, making the findings of this study vital to improving the long-term well-being of refugee migrants.
The study was conducted in partnership with researchers from the University of Newcastle conducting ethnographic longitudinal studies, as well as Macquarie University, Sydney, which conducted descriptive qualitative studies similar to those undertaken at Curtin University.
The main focus of the WA study, which was funded by the Australian Government Department of Education and Training, was to determine the “expectations, aspirations and academic preparedness of students from refugee backgrounds (SfRB) seeking to enter undergraduate study from Intensive English Centres (IECs) based in secondary schools.”


Findings consistently showed a distinct struggle SfRB had with academic language, made worse by an apparent lack of individual face-to-face attention.
Whilst IECs at primary and high schools proved to be very effective, most participants of the study agreed that higher education enabling programs at universities were not very useful at all in aiding the transition into undergraduate study, which can perhaps, in part, be attributed to the decreased funding for higher education nationwide.

The second study, Empowerment and Health Promotion of Refugee Women, “explored refugee women’s perspectives and experiences of settlement in WA.”
Funded by Healthway, this project was conducted in partnership with Ishar Multicultural Women’s Health Centre, a Mirrabooka-based organisation that aims to provide inclusive, holistic and culturally-sensitive health services to all women.
There were 43 participants in this study, which was conceptualised using Photovoice, a participatory research tool where participants are given cameras and taught techniques to take pictures of their own lives.
In the words of Dantas, “Photovoice has been used successfully across the world with many populations exploring social, human, health, and livelihood issues. Exhibiting these pictures to the wider community helps foster a greater awareness of various issues.”
As with the study involving refugee students, participants of this project also reported feelings of isolation stemming from language and cultural barriers.
Difficulty in managing physical and psychological health issues, as well as facing barriers to gaining employment were key themes exposed in this research project.
However, many women felt accepted and welcomed in multicultural Australia too, saying, “The life here makes me stronger than I was before.”
The final study, Minimising Skills Wastage and Maximising The Health Of Skilled Migrant Groups, (funded by the Bankwest Curtin Economics Centre) aimed to investigate issues surrounding the underutilisation and atrophy of professional migrant skills.
A survey of 508 skilled migrants revealed that over half (53.1%) of respondents indicated that their current WA job was of a lower skill level than the job they had prior to migrating.
“We have engineers driving taxis, maxillofacial surgeons working as dental assistants instead, because of the 14 years of retraining required,” Dantas said.
The research team identified several barriers to gaining employment such as language, discrimination, underlying racism and a lack of professional and social networks.
Under-employed skilled migrants also faced stressors that affect their mental and emotional health, such as feeling unfulfilled and undervalued which lead to mental health issues such as anxiety, insomnia and social isolation.
Dantas proceeded to guide the formulation of a skilled migration transition framework using the results of this study.
The research team proposed the introduction of a pre-migration kit, employment Kit, settlement kit, occupational kit, employer kit and an integration kit, to help smoothen the transition process. (More information available at http://news.curtin.edu.au/events/launch-global-migration-research-findings/)

“I would like to have a much more transitional impact of my research,” says Dantas, “so that the recommendations made by the participants can be used by policymakers to make a real difference to the lives of refugees and migrants and there is federal funding for programmes that support migrants and refugees.”

Dantas, who is currently a Professor of International Health at Curtin University, has been an educator for 30 years.
Having begun her teaching career in 1987 at SNDT Women’s University in Mumbai, she has since worked in numerous countries all over the world.
When asked about where her passion for such issues arose from, Dantas recalled how she “experienced first-hand the impact of conflict on civilians” during the 10 years she lived in Africa from 1990 to 2000.”
Having lived and worked in Uganda and Rwanda during times of civil conflict and the Rwandan genocide, she has a personal connection with refugee and migrant issues, which has translated into her research work.