A carnival with a cause in Perth

PUMA’s Kerala Carnival was a day of fun, but it also raised funds for kids 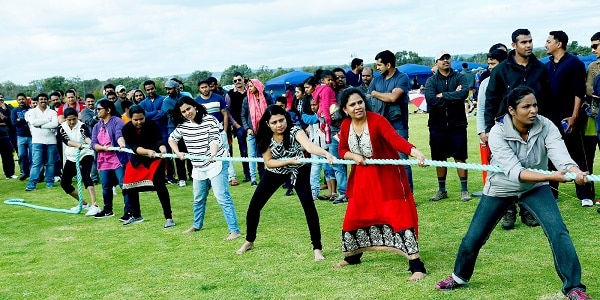 The name couldn’t have been more apt! On 5 August, a cultural extravaganza titled Kerala Carnival brought together close to 800 people from diverse communities for a day of fun, games, activities and food.
While those gathered at Harrisdale Pavilion had a gala time, the event also had a philanthropic side to it as it raised over $3,000 for Starlite Children’s Foundation that works for seriously ill children.
The event was hosted by Perth United Malayalee Association (PUMA), a non-profit cultural organisation.

Talking about the event, Thomas Daniel, President of the association, said, “We have always been hearing about God’s own country. We wanted to add an essence of that right here in Perth and show others what it feels like,” he added.
The event kick-started with a bold and rhythmic inaugural group dance. But the crowd puller for the day was the Tug Of War. Four teams competed amidst thumping cheers from a packed audience for the champion’s trophy after what took months of dedicated practice.
Then there was cricket, athletic events and sports for men and women exclusively. Face painting and henna tattoo, pony rides, jumping castles and variety of games added to the gaiety. To sum it up, it was evident that the Malayali diaspora love to celebrate in gusto, wherever in the world they are.

But it was the culinary delights that caught my attention. From the tangy red fish curry topped with turmeric flavoured tapioca to the appam and stew and the traditional hand brewed black coffee, everything was authentic Kerala style.
“Raising funds and mobilising the crowds was the most challenging part, but through multiple forums, digital teaser mails and posters, that was taken care of,” said Amal Raj, the secretary of PUMA. “There are almost 7500 Malayalis living in WA alone and most of them are well connected through Facebook and cultural associations. That definitely speeded up the branding, marketing and connected us to the right sponsors,” said Sujith Abraham, PUMA treasurer.
For the closing ceremony and final prize distribution, the chief guest was Yaz Mubarakai MLA, Member of Jandakot Australian Labor Party.

Mubarakai expressed astonishment at the felicity with which this event was executed. “This appears to be a perfectly executed management lesson, with all the principles of leadership, team work and time management, harmoniously synced under the same umbrella,” he said.
For some participants, the day turned out to be even more special as they emerged winners of the lucky draw. The prizes included a 55-inch LED TV, iPad and other household utilities.
What made this event distinct from many other cultural programs was that it was all for a cause. Over $3,000 was raised and the amount was donated to Starlite Children’s Foundation. Starlite strives to brighten the lives of seriously ill children and their families. “Through this major contribution, PUMA would be helping many re-discover the joys of childhood,” said a contented Kelly Levender from Starlite.
“This is our adopted home now and we always wanted to give back something to the Australian community,” said Jissmon Jose, the carnival convener.

From very humble origins, PUMA has proved to be a mature and empowering cultural association, keeping up to these ideologies.