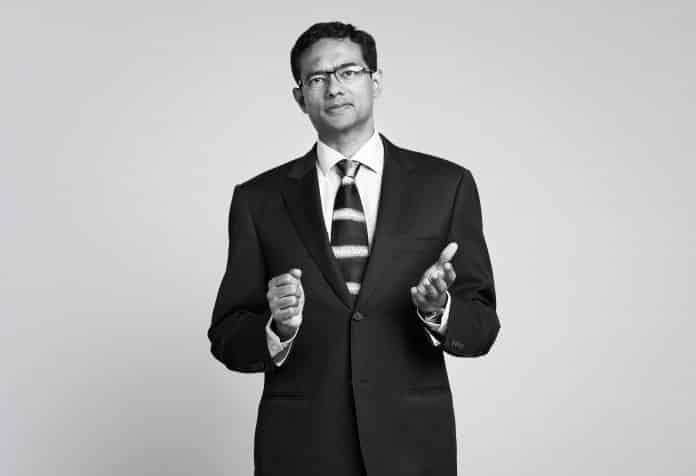 Reading Time: 4 minutesSydney’s PEEYUSH GUPTA is awarded AM for significant service to business, and to the community, through governance and philanthropic roles
The first things that strike you about Peeyush Gupta are his youthful looks and humility. A few minutes into the conversation, it becomes clear that he is also an excellent listener, his ability to ask strategic questions showing a very intelligent and curious mind at work.
These among other qualities led Peeyush, along with four other partners, to build a well-respected financial advisory and research firm IPAC, and subsequently sell it to AXA for an estimated $200 million.

Along the way, Gupta has served the community in his role as director or trustee of a number of professional, educational and philanthropic institutions, ranging from NAB, LINK, MLC, AMP, SBS, icare, Murdoch Books, Western Sydney University, UNSW Business School and Ascham School.
Here, this extraordinary Indian-Australian tells us about his eventful journey.
Coming to Australia
Dad was in the Indian Foreign Service, so our family lived around the world, moving every three years. We arrived in Canberra on Dec 13, 1975. I completed Years 11 and 12, and was one year through my first university degree when Dad was posted again. I stayed on to finish my degree, and then obtained PR. My brother also came back a few years later to do his uni studies. Dad and Mum returned to Australia to live permanently some 20 years later after Dad had retired.
Due to the nature of Dad’s job, I went to six schools (in London, Kathmandu, Belgrade, Jaipur, Delhi and Canberra) before I graduated from high school. I wanted to be a doctor initially, and got into Medicine at Sydney University, but could not afford to move from Canberra to Sydney as an overseas student (Canberra did not have a medical degree in those days). So I did a degree in Computing Studies instead initially. After one year of work, I went on to do an MBA in finance at UNSW. Later in life, I did senior executive programs at Harvard and London Business Schools.
Where it all started
For some reason, I thought no one would give me a job, so thought I’d have to start my own firm, which I did with some partners whilst I was doing my MBA. We called the firm IPAC- Investment Planning and Advisory Company. Two of my partners were Sri Lankan by heritage, although one had lived most his life in Australia, the other a lot of his in England.
Our biggest impediment initially was not so much our ethnicity as our youth: the four partners were all in their mid-20s at the time, and inexperienced. However, the quality of our research attracted large corporate clients (eg. the banks and life insurance firms), and we quickly gained a reputation for being thought leaders in the emerging wealth management industry. The credibility of having some of Australia’s largest financial firms as clients of our research, in turn, gave us credibility with other clients, which helped build the business.

“Success was not overnight, it took a patient 20 years to build the firm! By luck rather than design, the partners had complementary skills (sales, marketing, operations), similar values, and mutual respect, so the partnership prospered over time.”

We sold the business when I was in my early 40s, so I did not need to work for money thereafter. Nonetheless, as IPAC’s journey was not finished, I worked on for another seven years for the multinational firm AXA to whom we had sold our business. When I turned 50, I transitioned from a CEO role to a ‘portfolio’ role, consisting of governance roles.
The challenges and rewards of being on various Boards
Generally, I accept directorships with firms whose mission I am passionate about. Eg, SBS as I believe the role of quality public broadcasters to be fundamental to the sound operation of democracies; Western Sydney University as I believe education is a key pathway for people, especially migrants, to succeed in life, and of course my various roles in the banking and financial services sector, as the effective creation of credit and deployment of investment underpins the economic success of any country.
All jobs have periods which can be frustrating, and being a Director is no different; however, if you believe in the underlying mission, it gives you the strength to persevere through the difficult times.
Peeyush on being on the Australia Day Honours List: “I felt honoured and grateful. Life is in three phases: Struggle, Success and Succession (or legacy). Being in the legacy phase of my life, I feel the honour recognises the contributions I have made and am seeking to make to the issues which I am passionate about, including the finance industry, education and proper governance and stewardship.”
On future plans
My parenting responsibilities are not yet over, and my children are still in high school or university, so supporting them to complete their education and get settled into careers remains an outstanding duty. Professionally, I would like to support each of the firms on whose boards I serve to continue to fulfil their mission and grow. This includes one of the leading firms in quantum cybersecurity, where I would like to see world-leading Australian technology being successfully commercialised.
Advice to new migrants
Success generally derives from attitude, capability and hard work. Most migrants have the will and the drive to succeed as they have no other fall-back. To that, you need to add some skills or capabilities (generally, but not always, through education). And then hard work, over a period of time. Having integrity, good values, and humility also helps (as luck is often important in success too!). Australia is a wonderful country to live in, and provides the opportunity for all who are prepared to put in to succeed. I believe it is important for all people to make some contribution to whatever community they live in, so I would encourage all migrants to give back in whatever way they can to causes and communities that are important to them.