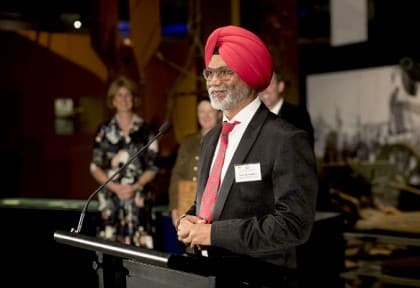 On 5 June 2017, Dr. Navtej Sandhu undertook an oath to loyally and faithfully serve the nation as an Officer in the Australian Army Reserve.
Indian Link caught up with this dynamic and driven Adelaide-based GP and skin cancer specialist, immediately after his appointment as an Army officer.
Hailing from a small town, Fatehgarh Churian in Punjab, Dr. Sandhu studied pharmacy and medical studies from a Government Medical College in Amritsar and started a pharmacy there. But the Punjabi mundaa’s mother saw much more potential in him. Following her motivation to study further, a young Navtej Sandhu took an MBBS degree from JSS College in Mysore and returned to Punjab to work with the Punjab Civil Medical Services.

Unhappy and unsatisfied with his work, Dr. Sandhu decided to explore opportunities in Australia. “When I landed here, I never thought I could get to become a doctor. I came on a student visa to study Information Technology at the University of South Australia in the year 2004. I would do my classes in the morning and drive a taxi at night.”
How did his dream of becoming a medical professional in Australia come about?
“A friend read a newspaper article about the dearth of medical professionals in the state. He contacted the journalist who wrote the article and then the Healthcare Department and figured out the application process for me. I went through the websites they mentioned, prepared for the job interviews and after a few months got a job as a GP in Woomera, where I was on call 24/7.”
Practising for a year in Woomera, he returned to Adelaide and started his first medical centre in 2008. On the 25 May this year, Dr. Sandhu was declared the national winner of the Defence Reserves Support Council’s Employer Support Award, in the small business category.
He won this award for the unabated support provided to his employee Toni Chapel, a nurse at his Hackham Medical Centre, who is also a Lance Corporal in the reserves.
In order to work at medical centres while serving in the defence forces, the employees need much support and flexibility in terms of their working hours, leave grants, and even moving of patient appointments, so they can attend their Army Reserves training. Most medical centres would consider this an inconvenience and a hurdle for their business.
“We have supported numerous army professionals like Toni, who work at our medical centres,” Dr. Sidhu revealed. “Toni nominated us for the state award last year and we won. At that award function I expressed my wish to join the Army and serve the nation, and today my dream came true as I was appointed the ‘Dr. Captain’ for the 9th Combat Services Support Battalion.”

He added, “This country offers everything you can dream of.”

The next few weeks will see Dr. Sandhu attending Army Officers’ training. Upon donning this new hat, he is a tad worried about staying fit at 53 and striking the right balance, so he can dedicate equal time and energy to both his medical practice and the Australian Army Reserve. This also means being away from his family for a long time, but he’s confident that his family, like always, will support him at every step of this journey.
Currently Dr. Sandhu owns 7 medical centres in Australia and intends to expand each year. A visionary, he is passionate about giving back to both the countries he has called home. His ultimate goal is to retire as Lt. Colonel at the Australian Army Reserve, and also be able to give back to his motherland, by setting up a non-profit medical centre to treat the pervasive, chronic problem of drug addiction the state of Punjab faces.
An inspiring success story, how would he advice new residents in Australia?
“Work hard and do not go for shortcuts; you’re sure to be successful.”