SHIKHA CHANDRA lists her top of the pops at Parramasala 2018 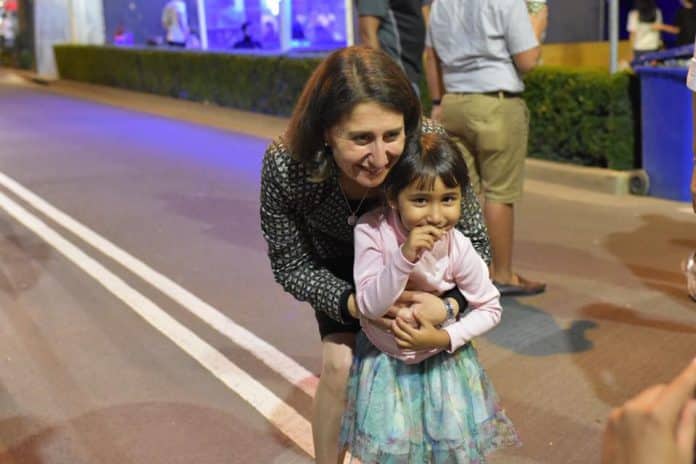 Reading Time: 5 minutesYou could call me a Parramasala veteran. I’ve been attending it since its inception in 2010, and on two occasions, even participated in the street parade. Decked up in my pink sari I joined scores of my sisters in the Pink Sari campaign for breast cancer awareness, showing off my moves to Disco Wale Khisko while at the same time urging women to go and get screened.

This time round, I chose to marinate in the (Parra)masala all three days, deciding to see as much of it as I possibly could. I’ve got to say, I did enjoy myself as I immersed myself in these aspects essential to this festival:

But my personal favourites? I pick my top five here for you.
Parramasala Welcome Opening Ceremony Parade
Some 500 performers from 40 cultures set off from Town Hall at 6.30pm, armed with drums, cymbals, flags, flared skirts, some groovy dance moves, thumping music and plenty of colour. They were belly dancers, drummers, classical Indian dancers, Chinese performers, Bollywood artists. Marching along, in a show of unity, were politicians, led by none other than the Premier of NSW Gladys Berejiklian, who smiled and waved and chitchatted her way through, stopping to pose for selfies with anyone who asked, and a cuddle for the little ones. The parade made its way slowly through Church Street as onlookers on either side cheered the performers on, and finished off at Prince Alfred Park. It marked the beginning of Parramasala, with its characteristic explosion of colour, movement and sound.  A special mention here to the sea of volunteers and staff who joined in.

Dream Girls of Bollywood
Swag se swagat, Parramasala! On opening night, the razzle dazzle of Hindi film dance was brought home to us in a Mumbai musical. It showed the evolution of the hybrid dance form that is now known as Bollywood, taking us the from the era of the gentle Pyaar kiya to darna kya and Inhi logon ne through the unforgettable ilk of Salaam-e-ishq, to the peppy Baby Doll and Swag se swagat, and of course the very latest Ghoomar, without which no Bollywood musical can now be complete. But can Bollywood be complete without Sridevi, you ask. Fitting to have a special Sridevi tribute section – hey, we almost expected it – even as we come to terms with the recent loss of a legendary Bollywood diva. Kudos to Swapna who coordinated the 20-strong cast of dancers and musicians, and her daughter Shruti who sang those upbeat tunes.

Jyotica and Kushal
Zee TV Sa Ra Ga Ma Pa sweethearts Jyotica Tangri and Kushal Paul have their own fan followings among millennials after their appearance on the talent show, and it was wonderful to see them on a Sydney stage. Jyotica is well known for recent hits such as Pallo latke (Shaadi Mein Zaroor Aana), Ishq de funniyaar (Fukrey Returns), Tere bina (Tere bina) and Tu hi hai (Half Girlfriend), besides Punjabi pop. Kushal Paul at only 17 years old has all the markings of a true rockstar, Haan main jaanu! (Sorry, couldn’t resist that!) Both had their Sydney spectators swaying to their peppy numbers as they built a great atmosphere in the Main Stage surrounds. The duo balanced each other off superbly in what turned out to be a perfect night for this kind of music.


Seeta Patel
The UK-based dancer, choreographer and film-maker Seeta Patel was in full Bharatanatyam mode as she presented two beautiful numbers at Lennox Theatre. The first performance presented Krishna and his glorious playfulness, but it was the second that truly stunned. A young devotee waits to see her Lord, Shiva Nataraja, and give him a letter describing her feelings. But as Shiva walks past in a procession she cannot catch his attention. Disappointed but not dejected, she waits for another time. This time round, she is successful. Seeta nailed the anticipation, the early frustration and subsequent fulfilment with her bhavam (expressions) – you felt as though Shiva had passed you by and you missed your chance at a meeting with him, and later that indeed you shared that special moment with him. Simply stupendous. And moments later, we saw Seeta on screen, playing the modern powerful woman in the award winning short dance film The Art of Defining Me (2013). In this film Seeta explored the experience of artists of colour who feel boxed in as they continue to be seen as people of colour, with expectations that their work will be influenced by their cultural roots. What, Seeta asked, is our USP (unique selling point)? How do we define ourselves as artists?

Gayatri: Singing for the Divine Beloved
Carnatic and Khayal vocalist Nadhamuni Gayatri Bharat presented the work of age-old Indian women poets. Typically, their compositions are devotional, and as Gayatri sang from Andal, Kamali, Kanhopatra, Meera, and from Gangasati, Vengamma and Janabai, she attempted to explore divinity through the feminine. I was engrossed as I watched the full set of the show. Gayatri was mesmerising as she sang in various languages.  The full ensemble of accompanying musicians was a feast for the eyes and delight for the ears. I wish she’d stayed longer: although she did 5-6 songs that were long pieces, I felt I wanted more.
*
Worthy of mention also were a panel discussion on ‘How South Asians are shaping the next great city’ presented by Sydney’s Nautanki Theatre Group.
In other fare, stand-outs for me were indigenous singer MiKaisha Masella, the Pacific heritage of the Matavai Cultural Arts, Classic Flow Yoga Live, and Annalouise Paul’s flamenco.
Things that needed a little more work at Parramasala this year? The workshops could have been better organised; ATMs needed to be more accessible as most places were cash only except one or two that offered pay-wave; more tables were needed at seating areas to eat, and possibly more areas to eat; some shade for performers and spectators; Riverside Theatre to look more decorated and a part of it all, and perhaps more staff to help around and explain what was happening where.
Gladys Berejiklian’s photos: Facebook
- Advertisement -
Share
WhatsApp
Facebook
Twitter
Linkedin
Previous articleHair for care: Indians raise funds to fight cancer
Next articleNational Clean Air Program needs transparent action: Greenpeace