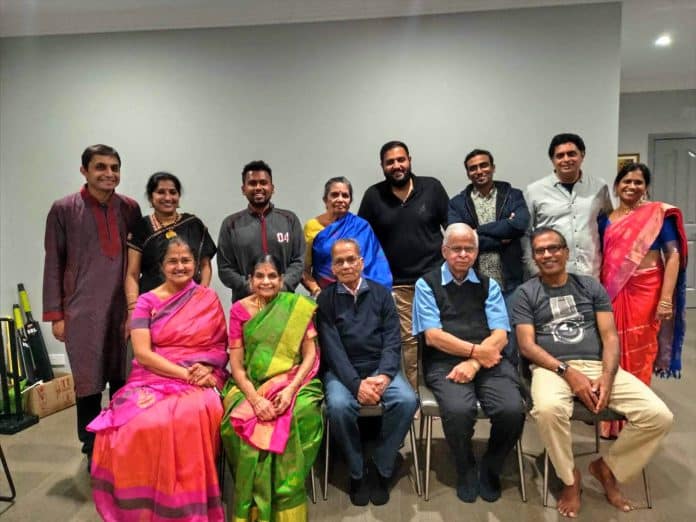 He’s got 25 guests coming to his place in a couple of hours, but Mohan Ayyar is typically calm and composed as he chats with Indian Link.

He’s talking about the great love of his life, Carnatic music, of which you could say he’s a pioneer of sorts in Sydney’s Indian community.

As one of three founders of the classical music organisation Pallavi Inc, Mohan has been responsible for the thriving classical scene in Sydney for the past 25 years.

In fact, the 25 guests that Mohan is preparing to receive are all musicians, brought together for a major event to mark this special milestone.

The Tamil drama Sri Thyagarajar, featuring the popular actor TV Varadharajan, is set to be staged on Sun 1 March at Red Gum Function Centre in Wentworthville.

Joining him on stage will be no less than twenty other artistes, ten from India and ten from Sydney Nadaga Priya.

Pallavi Inc has certainly come a long way. Tracing its history, Mohan said, “It began as an idea in 1994. There was very little by way of Indian classical concerts back then, and with fellow music aficionados V RamNath and VV Ramesh, I organised two concerts to test out the audience. The early response was so good that we formally launched in 1995 as Pallavi Inc, with a star of the stature of Bombay Jayashri.”

The name Pallavi was well chosen: it is Sanskrit for ‘sprout’ or ‘shoot’, and if the founders intended it to be ‘a stem resource for expansion’ they must be quite pleased with it all now.

RamNath said, “In its 25 years, Pallavi has successfully presented a total of more than fifty concerts – music as well as dance – by some of the best-known artistes from India.”

Access to these legendary musicians, it turned out, was not difficult; no doubt they were impressed by the sincerity of the efforts in far-away Sydney, but equally, all three founders have family links to the industry in India (VV Ramesh particularly, is the brother of VV Sundaram of Cleveland fame, the largest centre for Carnatic music outside of India).

At the same time, Pallavi was able to spot emerging talent particularly well. “Some of the young musicians we presented to our audience in the 1990s such as Sudha Ragunathan, Sanjay Subramanyam and S. Sowmya are now at the pinnacle of their careers,” Mohan beamed.

Mohan himself is a performing musician: his preferred instrument is the keyboards, which he picked up on his own as a teen. He continues to teach even though his day job is not in music, and he also runs the website www.carnaticcorner.com His wife Sangeetha is well-known as a vocalist.

Of course there have been challenges along the way. “Costs were high, given that Australia is a small audience with only two cities Sydney and Melbourne. In the US, with 15-20 cities on the tour map, it is easier to share the bulk of the costs. But the artistes were eager to come, and so we took the financial gamble even though the costs were prohibitive and we bore some losses.”

The concerts though were always impeccably organised, and so Pallavi built up critical acclaim.

“We took pains to start on the dot and kept speeches to a minimum, making it all about the performance alone,” Mohan shared.

Except maybe once when the stage curtains were set ablaze accidentally, he laughed.

“It was in our first year and we had a sell-out show with Lalgudi Jayaraman at Sydney Uni. The curtains caught on fire, and we had to evacuate 500-odd people! The fire brigade came… but luckily no major damage was done, and the concert resumed peacefully.”

“The audiences have changed,” Mohan mused. “There’s always been lots of interest, but new organisations sprang up, and competing activities have increased such as the weekend movies. Despite the increase in population, we find we are now having to skip the large auditoriums as venues in favour of smaller community centres.”

And yet, the determination in his voice is quite clear as he concludes, “We are going to continue bringing the great tradition of Indian classical music and dance to wider audiences, especially to the youth. With community support, we hope to continue organising quality concerts.”

In case you’re interested in their latest offering Sri Thyagarajar, you might be disappointed: it has now sold out.