Where Did I Leave My Purdah? by Sydney’s Adakar Theatre: A review 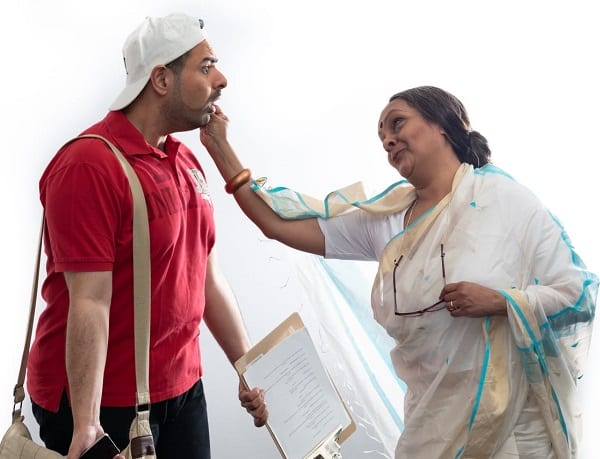 Perhaps the Indian subcontinent will never come to terms with the incidents of 1947. Given the frequency with which stories from the Partition of India pop up in popular culture, it is clear that it is a wound that is not yet healed, or one that will not be allowed to be forgotten.

Adakar Theatre picks up on this recurring theme in its latest production Where Did I Leave My Purdah? Prominent Mumbai playwright Mahesh Dattani’s script, it has been claimed, is inspired by the real life story of Zohra Sehgal, a theatre actor who moved to India after Partition and became a leading figure in the performing arts.

It tells the story of Nazia Begum, an octogenarian who after years in cinema, wants to revive the theatre company of her youth, well-known for its production of the legendary Abhigyan Shakuntalam.

It is a script that lends itself easily to the ‘play within a play’ format, and in its Sydney version, the meta-theatre of it all was executed not unsuccessfully.

Directed by Saba Abdi, herself a contemporary of Dattani, the undoubtable star here is the story itself, a very personal tale of the human collateral of this heavily political act and its grossly violent aftermath.

Bobby Mallick as lead actor comes a very close second, though. She played the aging diva effectively – with every deep-throated laugh, every over-confident phone call, every brushing aside of those lower down the food chain.

Equally, she was more than convincing as the tormented old woman who hides a shameful secret – with every tremor of her fingers, every wistful look into the distance, every whispered word.

At the very end, she grabbed the limelight with a successful amalgam of both personas – a picture of smiling maternal love, but still very much the prima donna: I want to dance, spin me around.

Second leads Aparna Vats and Aparna Tijoriwala both shone in the first half. Aparna Vats impressed as the feisty young Nazia who would go to any lengths to be with her love, including giving up her family and country, even killing someone. And yet, breaking up with the love of her life not long after, she did not exactly resonate, even though there was plenty of loud histrionics.

Similarly, Aparna Tijoriwala was brilliant in the first half as Nazia Begum’s niece Ruby who shares a turbulent relationship with her illustrious aunt. As the two bickered away, the opportunities for laughs came by thick and fast. Tijoriwala dazzled in her disdain, the light catching the glint in her eye as she plotted to reinstate her mother as the purer, kinder, more talented sister. (More about the lighting later). And yet in the second half, she came undone fairly quickly, when it became obvious that history had repeated itself in her own life story.

For both Vats and Tijoriwala sadly, it’s as if their characters were rushed through to their conclusions, after being allowed to develop strongly early on.

The same could be said of the play itself: background being established in an intriguing and elaborate fashion in the first half, the second half saw the emotional intensity go up a few notches and the resolution reached far too swiftly.

Cleary the plot was skewed strongly towards the lead character, to the detriment of others. Luckily, Bobby Mallick as the aging thespian rose to the challenge wonderfully.

Sets were fairly simple and static, but served the purpose well of conjuring up a feel of theatre of an older partition era – trunks of costumes and props that Nazia Begum wanted to get rid of, almost as if wanting to obliterate certain aspects of her own history.

Nothing particularly noteworthy in the costumes either, except that some of the cast appeared somewhat stiff in their gear, Shakuntala and her girlfriends particularly.

Lighting, for some inexplicable reason, drew attention to the feet, except on the odd occasion it caught the glint in Aparna T’s eye.

The Shakuntala story meandered through the narrative, not just in the actual staging of bits of the original play, but also in the forgetting of the past, in the moving on without the significant elements of one’s own history, and in the ultimate jogging of the memory by a tiny token.

The takeaways from Purdah were many. We learnt that the effects of Partition and war are felt for generations.

That men can be savages.

That we must talk more with our grandparents.

That we must make amends now before it is too late with significant others who are no longer in our lives.

That forgiveness and acceptance have the power to free us internally.

That as long as stories of Partition continue to be told, the injustice of it all will never be forgotten. And that is the very reason they must be retold, painful as they might be at every telling.