Early on during the match, Indian broadcaster Sony quietly switched off Australian commentator Kerry O’Keeffe, blacking him out from Indian airwaves. 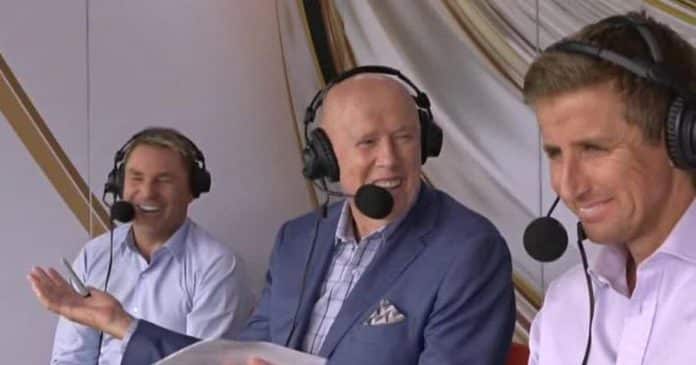 Reading Time: 3 minutesYou may have missed it amidst the sheer volume of batting records India broke during the first two days of the SCG test match, but early on during the match, Indian broadcaster Sony quietly switched off Australian commentator Kerry O’Keeffe, blacking him out from Indian airwaves.
Instead, Sony (which passes through the feed from Australian broadcaster Fox Sports) has opted to replace O’Keeffe’s stints at the microphone with commentary from a local commentary team whenever the 69 year-old is on air, blacking him out from Indian airwaves.


First, to O’Keeffe’s comments. They were not well thought-out and were clumsy at best; but they were by no means malicious.
First, O’Keeffe joked that Mayank Agarwal’s first class triple-century against Railways came against the Railways “canteen staff”, a comment for which he apologised on-air on the very same day.
Then O’Keeffe remarked, poking fun more at his own inability to pronounce the Indian players’ names than anyone else, “Why would you name your kid Cheteshwar Jadeja?” It was a comment so benign that, were it said on the field, no one would have batted an eyelid. Nevertheless, O’Keeffe penned a generally well-written apology letter to Indian fans, where the matter ought to have ended.

O’Keeffe’s sledgehammer wit centres around regular self-deprecation and a steadfast refusal to take anything – especially himself – too seriously. Commentary in Test cricket is a difficult art; it is not easy to keep the viewer engaged and occupied in a game where there are often long and meandering periods of nothingness. To adopt O’Keeffe’s approach is to acknowledge the vicissitudes of Test cricket, which ebbs and flows perhaps more than any other sport in the world.
It is worthwhile noting also that O’Keeffe is one of the most well-researched commentators in world cricket; in fact, O’Keeffe is known to have researched club statistics even before visiting local club trivia nights at which he makes occasional appearances. It is a trait that puts O’Keeffe squarely outside the box of “ignorant foreigner”.
In recent times, the BCCI’s response to even the mildest criticism – however harmless – has been nothing short of Orwellian in nature. In fact, sources close to Sony and the BCCI are reported as saying “We cannot have someone making snide remarks on Indian players”. It is a stern reminder of the BCCI’s clout over local broadcasters and harks back to the Board’s controversial sacking of popular commentator Harsha Bhogle in 2016.
Bhogle, who has for some time been one of India’s most respected commentators – and incidentally commentates alongside O’Keeffe on Fox Sports, as well as ABC Grandstand – had been calling a March 2016 match between India and Bangladesh for Star Sports. Known as a fair and polite commentator – far less parochial than the likes of the myopic Manjrekar and Chopra – Bhogle was presenting, as ever, a balanced view of the game, praising the Bangladesh team and players. This is hardly a laudable feat, given it is something most international commentators are accustomed to doing. Yet to some, Bhogle’s conduct was unacceptable; and unfortunately, some of his detractors happened to be the most influential people in India.
Amitabh Bachchan commented, “With all due respects [sic], it would be really worthy of an Indian commentator to speak more about our players than others all the time.”. This was then retweeted by Mahendra Singh Dhoni, with the latter commenting “Nothing to add”. Within days, Bhogle was sacked by the BCCI, speaking volumes of the inability of some Indian fans – and players – to see the bigger picture.
The removal of Kerry O’Keeffe’s commentary from Indian feeds is the latest example of the BCCI’s increasing aversion to any scrutiny and criticism. But it goes hand in hand with the BCCI’s ongoing governance woes; a milieu in which transparency has become the first victim of power.
Check out our photos from Day 3 here.