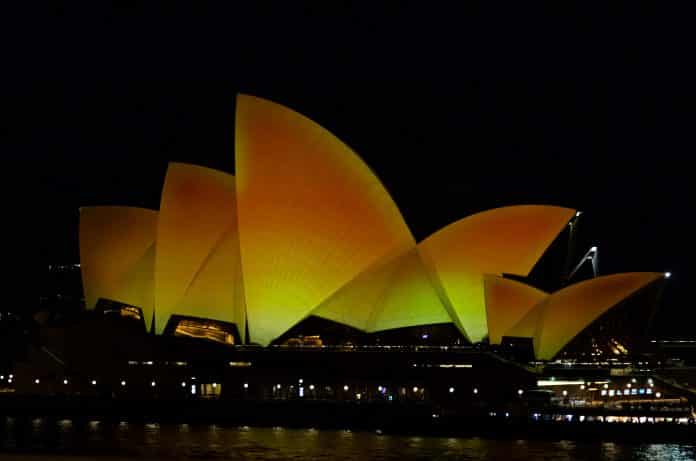 Reading Time: 4 minutesTradition has it that the night before Diwali, we light one solitary diya, or earthen lamp.
It is our version of ‘Diwali Eve’ – like Christmas Eve – and probably evolved because revellers could not contain their enthusiasm to go all out with the lights in every corner of the house. Chhoti Diwali, it came to be called – Little Diwali.
Here in Sydney, in the week before Diwali, we’ve just had our own version of Diwali Eve, or Little Diwali. Except it was not so little. It was almost as if our hometown lit one little diya to herald the Festival of Lights, the ‘little’ diya being – the iconic Sydney Opera House.


In the midst of a series of Diwali melas, this one is a refreshing Diwali event. Coming so close to the actual day, it captures the spirit of celebration beautifully – in the thrills of delight that go up when the lights come on at dusk. In the backdrop of the harbour, with the Harbour Bridge standing guard, our favourite monument becomes bathed in the warm Diwali glow of yellow and orange.
Diwali Mubarak, all! Bring on the mithai.

The NSW Government’s grand Diwali party is organised by Multicultural NSW and has been held at the Museum of Contemporary Art for the past few years. It is attended largely by Sydney’s Indian community, but this time round, it was wonderful to see others from the mainstream who came by to wish us all a Happy Diwali. The spirit of sharing that marks this festival was indeed experienced in abundance.
Premier Gladys Berejiklian spoke among other things of the special place the Opera House has in her heart, given her father, a migrant himself, worked as a welder on the second highest sail. She could not have brought home the point better, that migrants contribute wholeheartedly to their new home, and that their contributions are valued, even as they share their own traditions with the rest of the nation.

“By lighting the Opera House, we are sending the message to the world that we come together to celebrate each other’s festivals and traditions,” she said. “It is also a sign of the deep respect we have for the Indian civilisation which is two millennia old, and of our regard for contemporary India.”
Minister for Multiculturalism Ray Williams, with his own warm comments, showed how well he has become acquainted with Sydney’s Indian community. He referred to the Opera House not just as a significant national icon, but one of the world’s most recognised buildings. “Diwali is an opportunity for us all to learn more about the customs and cultures of our friends, neighbours and work colleagues,” he said.
India’s Consul General, B Vanlalvawna, who will be finishing his tenure shortly, said he was happy to pretend the Opera House lights were a grand farewell organised just for him.
“Sydney’s Indian community, you must surely be the luckiest diaspora community among our 30 million diaspora,” he said to much applause. “In my own experience, the support and welcome the government here has given us is unparalleled. Diwali at the Opera House means a lot to us, here as well as at home, and I thank you sincerely. It is a wonderful symbol of gesture of peace, goodwill and brotherhood.”

For Dr GK Harinath, Chair of Multicultural NSW, this must surely be one of the most special of duties. “Diwali is just as much about inner light, as it is about the lighting up of our physical environments,” he reminded us all. The MC Khushaal Vyas, who brought in a welcome vibe of youthful exuberance, capably guided the Premier in the lighting of the sails at the appointed hour, counting down with much enthusiasm.
Adding considerably to the Diwali vibe, were the team from BAPS Swaminarayan Mandir led by Darshan Desai. Their Annakut food display, immaculately arranged with characteristic attention to detail, wowed the attendees immediately as they entered and made for a great selfie backdrop. (Very loosely, the Annakut tradition is Hinduism’s version of “For food and health and happy days, receive our gratitude and grace”).

The musicians from Gajanan Cultural Mission provided the perfect musical backdrop for this very special Diwali event.
A significant inclusion in the annual event has been the felicitation of the government of Indian seniors.

Indian seniors who were honoured during the 2018 NSW Government Diwali event:
Mrs Bijinder Dugal
Mrs Bijinder Dugal, co-founder and director for Aus-Indian Aged Care Support Holistic Association Australia Foundation, for her work creating communities where elders can enjoy their golden years, believing that ageing is not lost youth, but it is a new life stage of opportunity and strength.
Mr Dave Passi
Mr Dave Passi, for his devotion serving seniors, specifically through his role as President of the Indian Seniors Group in Hornsby.
Mr Narayan Pradhan
Mr Narayan Pradhan, for supporting the Nepalese community, particularly through his connection with the Nepali Australian Association and the Gurkha Nepalese Community.
Dr Sudha Natarajan
Dr Sudha Natarajan, founder and Public Officer of the Resourceful Australian Indian Network. She is well known for her passionate commitment to the welfare of the frail aged in the Indian community in the South East Sydney region.
Dr Noor Vellani
Dr Noor Vellani, for his dedicated service to the health and well-being of communities in the lower Blue Mountains and his particular support of the elderly in the area.
Dr Mira Vellani
Dr Mira Vellani, for her dedicated service within the medical field, serving and providing counselling support to older migrant women in the area.
Dr Sikander Khan
Dr Sikander Khan, as a senior South Asian Muslim Surgeon, for his work in raising awareness of community perceptions and Islamic perspectives in serving the elderly and specific religious needs of Muslim elderly.
- Advertisement -
Share
WhatsApp
Facebook
Twitter
Linkedin
Previous articleIt’s beginning to look a lot like Diwali
Next articleDeepavali at Church