Olympic flame lit amid uncertainty due to coronavirus 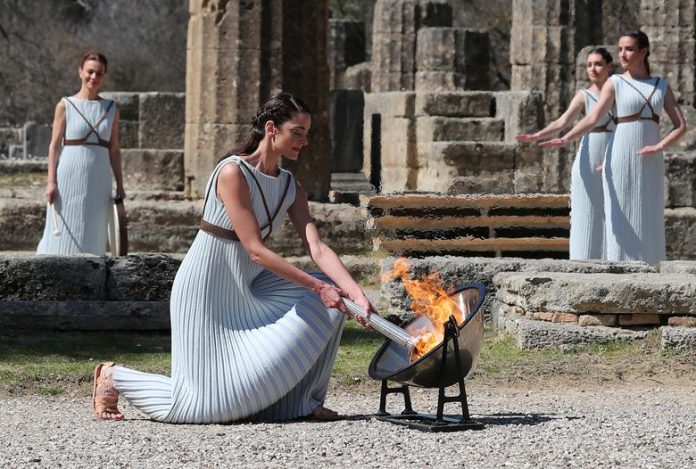 The flame for this summer’s Tokyo Olympics has been lit in ancient Olympia, Greece.

Greek actress Xanthi Georgiou in the role of an ancient Greek High Priestess used a concave mirror to focus the sun’s rays and lit the torch at 12.10 a.m. local time on Thursday.

From Ancient Olympia, the flame will travel through Greece for eight days and then be handed over to the Tokyo 2020 organizers on March 19 at the Panathenaic Stadium in Athens, where the first modern Olympics were staged in 1896.

The ceremony was closed to the public due to the spread of coronavirus. A week later, on March 19, the hand over ceremony will be held in Panathenaic Stadium.

Katerina Sakellaropoulou, a former Greek top court judge and the first ever woman in the history of the Greek modern state who was elected President of the Hellenic Republic in January this year, will be present in her new role. She formally assumes office this Friday.

Another woman, Katerina Stefanidi, who had won a pole vault gold medal at the 2016 Olympics, will be the last Greek torchbearer to carry the Flame inside the Panathenaic Stadium.

A total of 600 torchbearers will carry the Olympic Flame across 3,200 kilometres in Greece, passing through dozens of cities and archaeological sites, HOC officials said.

The second leg of the relay will end in July at the stadium in Japan, which will be the main venue of the Tokyo 2020 Olympic Games.