It’s the third time the Nipah virus has reared its ugly head in India. In 2001 and 2007, it touched West Bengal. This time round, in Kerala, it has claimed 11 lives so far. 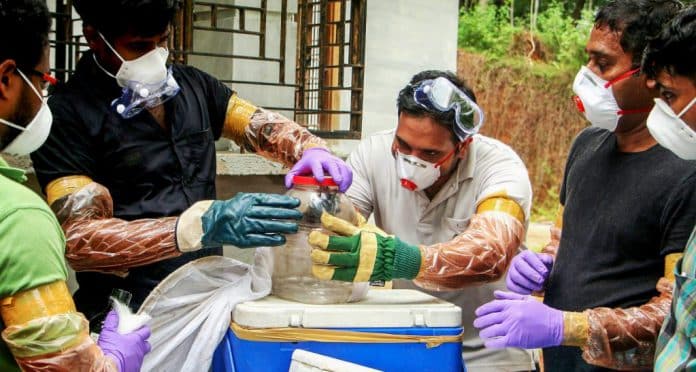 Early and efficient containment measures seem to have been taken jointly by both India’s Ministry of Health and Family Welfare and the Kerala government in the containment of the Nipah Virus (NiV) that has claimed 11 lives so far.
The outbreak is a localised occurrence, a Ministry statement said, adding that there is no threat of its spread and thus no need to panic. Kerala Health Minister K.K. Shailaja has indicated that while there is no need to panic, members of the public must be alert.
The outbreak of the virus, spread by fruit bats that infects both animals and humans, came to light when two brothers and their aunt in Perambara of Kozhikode district died within a few weeks. One of the dead is 28-year-old Lini Puthussery, a nurse in Kozhikode attending to Nipah virus patients. The mum of two was cremated on 21 May even before her family members could bid a final goodbye because of fears that the virus could spread.
As of now, 13 patients are confirmed afflicted with the virus, it is being reported. There are 16 other suspected cases. The disease has been confined to the two districts of Kozhikode and Malappuram.
Measures taken so far
“A multi-disciplinary central team from National Centre for Disease Control (NCDC) is presently in Kerala constantly reviewing the situation of the Nipah virus disease,” the ministry said in a statement.
The team of experts has reviewed the treatment procedure, infection control practices, use and availability of personal protective equipment and drugs. It is also taking steps to create awareness in the general public to allay any fears about the disease. “An action plan has been developed for healthcare staff and simulation exercises planned… It was decided to provide separate ambulances for transportation of the suspects to designated isolation facilities,” said the ministry.

Isolation wards have been opened in many hospitals in Kozhikode. Hospitals in public and private sector have been provided with personal protective equipment, it said. The Ministry has ensured availability of diagnostic kits, personal protective equipment and risk communication materials. High quality personal protection equipment has been provided to health care personnel.
Even though the Nipah virus, spread by direct contact with infected fruit bats, pigs or from other infected persons, infects both animals and humans, Central Animal Husbandary Commissioner SP Suresh, who is part of the Central team, said that after their examination of animals in the affected areas, no incidence of virus in animals has been identified and instead it is the humans that have been affected.
State health officials visited the victims’ house and sealed the unused well that had lots of bats, said Shailaja, and added that people are being educated to ensure that they do not eat any fruits that fall down from trees.
“The team found many bats housed in the well from where the family was drawing water. Some bats have been caught and have been sent for lab examination to confirm whether they are the cause of the disease or not,” said the ministry.
Reports also emerged about the find of half eaten mangoes in the family home.
Causes
Transmission of NiV takes place through direct contact with infected bats, pigs or from other NiV-infected persons.


Atul Gogia, Senior Consultant, Department of Medicine, Sir Ganga Ram Hospital, said, “Nipah virus is just another viral infection which affects the respiratory and central nervous systems with symptoms like drowsiness. Like most other viral infections, Nipah has no treatment and can only be managed through intensive supportive care.”
He added that people living in areas inhabited by bats or wildlife animals should be alert as there can be other infections that can afflict them.
Patients in care
“The entire expenditure of these patients would be borne by the state,” Kerala’s Minister of Shailja said.
An ex-gratia payment of Rs 5 lakh each to the families of the dead was also announced. Nurse Lini’s husband is in line for a government job following the tragedy, and his kids, aged 2 and 7, will receive Rs 5 lakh each.
Two Abu Dhabi-based entrepreneurs have pledged to support the two children. Santhi Pramot and Jyothi Pallat, executive directors of Avitis Institute of Medical Sciences in Palghat in Kerala, told the Khaleej Times they have pledged to sponsor the education of the boys. Lini was looking to move to the Gulf to better provide for her family.
In a final note that she scribbled for her husband in a hospital isolation unit, she urged him to take care of their children and take them to the Gulf.
Fake news
Meanwhile, following a complaint from the state Health Department, the Cyber Police here registered a case against misuse of the social media with lots of fake news being circulated with regards the outbreak of the virus.
State Police chief Loknath Behra had earlier warned against dissemination of false information and news regarding NiV, saying strong action would be taken against such people who resort to it. A case has been registered but violators are yet to be named.
Impact on tourism
The Confederation of Kerala Tourism Industry (CKTI), said in a statement that the concern now projected was larger than the reality.
“All tourist locations and the state in general are safe as usual for holiday activities. Tourism industry partners in the state are more vigilant and equipped to provide a hassle-free holiday to the visiting travellers. The airports, railway stations, hotels and places of visit are following the right protocols and are free of problems as usual,” it said.
IANS