Nip your hay fever in the bud 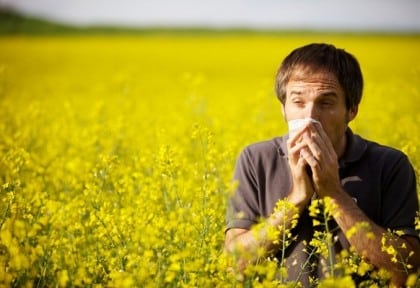 New shoots are sprouting and flowers are in bloom as the plants wake up for spring. The sun’s rays are warming the frigid air and colour is returning to the world. Though most people are elated to see the back of a chilly winter, with pollen hanging thick in the air, all is not rosy for the three million Australians suffering from allergies and hay fever.
One of the most common health conditions on the planet, hay fever is most rampant in people aged 25-34 years old. It also tends to affect slightly more women than men. The likelihood of developing the allergy is higher for people with a family history of asthma or eczema, and those exposed to cigarette smoke as a child.

Typically, the symptoms of hay fever are defined by sneezing, clear runny discharge or dripping from an otherwise blocked nose, plugged up ears, puffy, runny eyes that are sensitive to touch, an itchy nose, tiredness and trouble sleeping.
If you belong to the Hay Fever Casualties Club, this spring your body is again under attack from terrorist allergens. Your face is dripping as your border security goes into over drive to flush out the illegal immigrants. ‘No entry’ signs go up for foreigners as your nose and ears become blocked. Is there anything other than steroids that can alleviate your pain? Is it your destiny to live in discomfort every spring?
Throw despair to the pollen laden air! Here are some tips and tricks to beat hay fever at its own game and hasten your recovery.

One of the simplest ways to avoid an onslaught of hay fever symptoms is to hose down after a trip outdoors. Take a steaming hot shower and wash away the invisible pollen particles hitch-hiking on your clothes, skin and hair. Put your clothes in the wash too, to avoid the spread of allergens in your home. A hot shower also combats blocked nose and sinuses.

This is just a fancy term for rinsing your nose with salt water. The method is simple. Add salt to boiled warm water to make a saline solution. Then, tilt your head on one side and pour the water (ideally through a spouted vessel) in one nostril until it starts to flow from the other. Repeat with the other nostril. This flushes out allergens and loosens the mucus to help you breathe easier. You can also buy saline nasal sprays if you’re too lazy to make your own.

To help loosen congestion and clear the nasal passage and throat, inhaling steam often does the trick. Grab yourself a non-metallic bowl and pour in some boiling water. Bring your head close to the bowl and cover with a towel to prevent steam loss. Breathe in deeply and watch the magic happen. You may need to blow your nose a few times as the mucus loosens. Adding a few drops of beneficial essential oils like eucalyptus, tea tree or peppermint can increase the effectiveness of steam inhalation many fold. I personally tried a little Vicks Vaporub in a steaming bowl for my son and he has been a convert ever since.

Hot chilli peppers, jalapenos, mustard – these can be your best buddies when everything tastes like nothing. Spicy food clears the sinus passage and has a decongesting effect. When your mouth is on fire and your eyes are crying a river, rest assured you’re being cured. Garlic and horseradish are also helpful in unblocking nasal passages. Stick a peeled garlic clove on a skewer and roast on the stove. Once charred and giving off an aroma, inhale. These foods may only provide temporarily relief, but hey, that’s better than no relief.

Crush it with a cuppa

Nothing beats the warm hug of a cup of tea when you’re feeling under the weather. Peppermint tea is a useful weapon in your arsenal against hay fever. The menthol it contains works as a decongestant and expectorant, breaking down mucus to help clear the nose and throat. Hold the cup close to your face and inhale deeply while sipping. Team it with nettle and the benefits amplify. Green tea is your friend too as it has anti-oxidant properties that inhibit allergic reactions.