New Indian envoy to US presents credentials to Trump 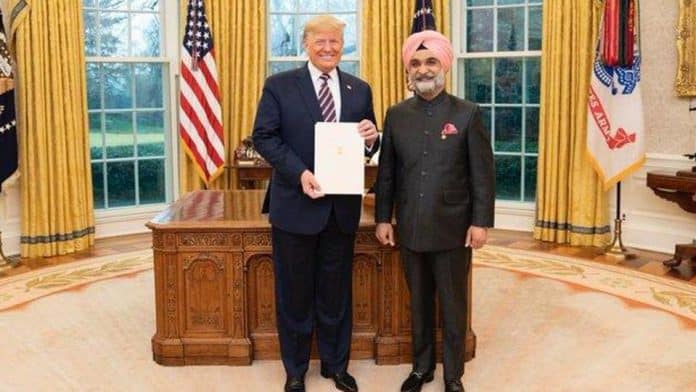 Taranjit Singh Sandhu, India’s new Ambassador to the US, has presented his credentials to American President Donald Trump at a special ceremony held in the White House, it was reported.

The ceremony took place in the Oval Office on Thursday. The envoy was accompanied by his wife and peer Reenat Sandhu, currently serving as the Indian Ambassador to Italy, the American Bazaar news said in a report on Friday.

According to a statement released by the Indian Embassy in Washington, Trump warmly welcomed Sandhu back to Washington and wished him success in his new role as New Delhi’s top diplomat in America.

On his part, Sandhu “affirmed his commitment to work towards strengthening the strategic partnership between India and the US which is anchored in mutual trust and friendship, democratic values and people-to-people ties”, it added.

At the State Department, Alice Wells, Principal Deputy Assistant Secretary for South and Central Asian Affairs, welcomed Sandhu back to Washington and said in a tweet that the new envoy was a “strong champion of US-India ties”.

Addressing a 200-plus strong gathering of senior US administration officials, lawmakers, business leaders, educators, Indian-American community activists including a good number of Sikhs, press and media persons, at his official residence in Washington, Thursday evening, Sandhu said: “It is like coming back home.”

Sandhu, who replaced Harsh Vardhan Shringla, had previously served as the deputy chief in the Indian embassy in Washington.