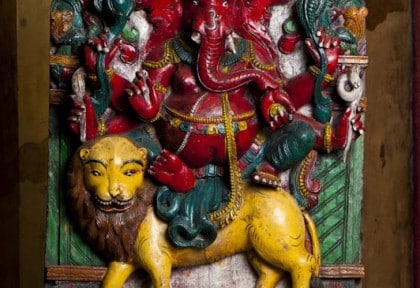 How Ganesha, the god of new beginnings, guided the launch of a popular Indian eatery in Sydney by AJOY JOSHI

In 2003 Nilgiri’s opened at St Leonards.
This was the culmination of a dream that started in 1988 when I first came to this country.
My dream was to launch an Indian restaurant, with an open kitchen in the main dining room; with five private rooms that served food from the five regions of India which also represent the fundamental five pillars of creation (jal [water], agni [fire], bhoomi [earth], vayu [air], and akash [space]); to have a small tiffin room that served thalis from different parts of the country, and last, but not least, to do a take-home/home delivery wherein the guests could swing by and pick up their food or have it delivered just in time for dinner, all piping hot, of course!
This delivery service would be like the dabba service of Mumbai, with a little polish, and a van rather than a bicycle.

This ‘black and white’ dream also had a few moments of vivid technicolour in it. I also wanted to have a cooking school where participants could travel to ‘my’ India through my food, and also learn a thing or two about the different cuisines!
Very ambitious, but as someone rightly said, “Unless you aim for the stars you can’t go any higher!”
So, here I was, 15 years later, living my dream… or so I thought.
The first month after the move was great. Everything was going according to the business plan that we had so meticulously put in place and things were looking up!
Then everything started to fall apart… and by the end of January 2004 we were looking to close the place down a mere three months after having opened it.
In the back office at Nilgiri’s, as we started to ‘relieve’ our staff (we could not afford to keep them anymore) both in the front of house and the kitchen, we were left with just eight staff members (having started with nearly 24!) to pick up the crumbs and see if we could salvage something out of this ambitious project which had all our money locked into it.
The banks and the financial institutions refused to lend us any money. The project was seen as high risk and there were no guarantees that we could survive the cut-throat competition of other establishments in Sydney selling so-called “curries”.
After much discussion, my wife Meera and I decided to speak with a man called S. Thyagarajan.

Thyagarajan lives in Bangalore. He is a civil engineer from Bangalore University and in the ‘60s he was posted to Sikkim as a commanding officer with the Indian Army.
Thyagarajan’s life was a dream life. He had his work and his family – his wife and two young kids, a boy and a girl. Life was great… until 1984.
In this year, all his ambitions were shattered when his wife Indira became unwell. He took her to Bangalore for a check-up.
A simple operation was required that would take half an hour, at the most, and Indira would be ready to go back home to join in the post-operative family celebrations.
But the doctor, and someone ‘upstairs’, had other plans. The so-called straightforward operation went completely wrong and Indira started bleeding internally.
Thyagarajan and the kids, who were waiting outside to take their mum home for the celebrations, were now frantically trying to look for help. Indira passed away at the hospital.
The family were devastated.
Life had taken a complete downward turn.
Raja, as he is called, coped with this devastating event by starting a collection of Ganeshas, the elephant god.

Ganesha did not bring his beloved wife back, but gave him the strength to live life and to look after his two kids.
Indira had been very good at Batik painting and had painted a few Ganeshas, and so collecting Ganeshas gave Raja the feeling of being close to his wife.
Today, Raja is close to 80 and though the void left behind by his wife’s untimely death can never be filled, collecting Ganeshas has helped him move on.
Until recently he was the single largest collector of Ganeshas, having featured in numerous magazines and media publications. The BBC has also featured him and his collection!
So, back in 2004 when Meera and I spoke to Raja about the demise of our business, his advice was to make a fresh start.
He also recommended starting with a Ganesha. He advised us that this might give us focus and renewed energy to fight back.
When you are down and out, and there is no hope, any advice is like a pearl of wisdom.
So, this pearl came from a man who had been through a lot and we trusted him implicitly.
With our last $4000 in the bank, and no hope of survival, we started our hunt for a very unique Ganesha.
Very soon we had found some wonderful ones from all across Sydney, some really beautiful ones including one even from Sikkim depicted in a tantric form (an unusual form of Ganesha with ‘consorts’). We also found one that was made by an Australian artist.
It wasn’t until we saw a plump Ganesha sitting in the window of a shop in Willoughby, of all places, that we knew this was the special one for us!
It is an unusual representation of Ganesha, as he sits on top of a lion, possibly Narasimha.

But without even looking at each other, Meera and I both knew immediately we wanted this particular one!
We went into the shop and were stunned. How were we supposed to start our collection which left us with, literally, only half our savings? You see, the asking price was a whopping $2000!
Even bargaining didn’t work, who would believe our sob-story anyway? We decided to get another piece made of bronze.
This bronze piece was good but it was no substitute for that piece!
However, we managed to hold on to the business for another month. We also decided to buy another bronze piece to keep us going; but we still visualised the other Ganesha and wished we could somehow obtain it, but we didn’t quite know how.

It wasn’t until one day in March 2004, driving through Alexandria, that Meera spotted the Ganesha that had eluded us for nearly two whole months.
He was sitting on top of a wooden box, almost as if waiting to be picked up by someone.
The asking price?
$500.
I paid the amount, there and then, and brought him straight to the restaurant.
He already had a spot at the top of the stairs. Perfect!
It was at this stage we realised that if we were focused and channelled our energies, we could even get out of the mess we were in.
So, once the spiritual side of the brain was assuaged, we started to focus on the professional side.
It took us a good five years to get out of the mess, but we were back with a vengeance!
Raja still lives in Bangalore.
Actually, he is my father-in-law. He is a great inspiration to people around him: his uplifting and wise philosophy and his “never say die” and “never say never” outlook is so engaging!

As for Nilgiri’s and Ganesha, the bond is still very strong. We continue to add to our collection of Ganeshas, to remind us that unless there is a spiritual belief, there can be no success!
Ganesha recently foresaw another new beginning for Nilgiri’s, this time at 3/283 Military Rd, Cremorne NSW 2090