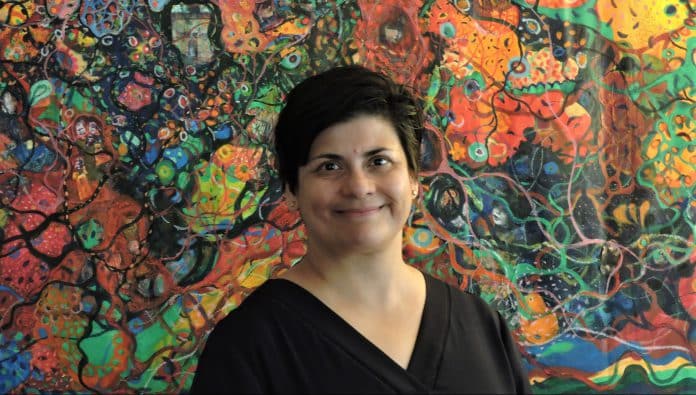 Reading Time: 4 minutesThe centuries old textile tradition of Kantha provides the inspiration, material and method as well as catharsis for artist Natasha Narain, who showcased her work in Melbourne recently.
A selection of works from her broader oeuvre, that includes paintings, artist books, prayer wheels and doll goddesses, is currently on display at the Walker Street Gallery in Dandenong.


For the exhibition ‘A Kantha Garden for her’ Natasha drove her portable canvasses 1720 km from Brisbane to Melbourne in what she describes as her most memorable trip.
She dedicated the exhibition to the memory of her parents, her mother having passed away just a few weeks before the event. For her first solo art launch in Melbourne, Natasha chose to drape her mother’s favourite Kantha shawl.
“I owe the legacy of Kantha to my mother Mrs Snigdha Narain as we mourn her loss and the earlier loss of my father, Brigadier Gautam Narain,” Natasha said at the launch. “Every mark on a painting and word on paper is owed to their love and their faith in goodness and in service. I thank my parents for their gifts of resilience, integrity and prayer.”

Kantha is an embroidery craft practised by rural women of Bengal and Bangladesh to make covers and drapes for domestic, ceremonial or ritual purposes. The traditional form of Kantha embroidery was done on soft dhotis and saris, with a simple running stitch along the edges. Motifs were drawn reflecting daily lives and included colourful images of festivals, flowers, trees, vines etc.
Invested with meaning, Kantha techniques and patterns were not documented but transmitted by word of mouth. This vibrant tradition, shaped mainly by women, was passed down through generations to map a family’s or a community’s history. Acting as a canvass upon which a woman could express her desires and worldview, Kantha was an intergenerational form of story-telling.

As part of her research, Natasha delved into the context in which Kanthas were created and attempted to apply this knowledge without direct replication or indeterminate attribution.
“I don’t have to replicate the actual craft processes of Kantha in order to evoke its emotional significance, but apply its conceptual narrative strategies and its approach to mark-making to create a multimedia contemporary body of work,” she explained.
As an Indian-Australian artist having spent time in both countries Natasha bridged her past to the present drawing on her diasporic journey to explore Kantha as a productive and cathartic method. Her research examined this ancestral tradition as an alternate system of knowledge rather than a women’s folk craft or practice.

There was much to admire among her pieces on display, especially the centrepiece installation that was thematically coherent and aesthetically beautiful. Cable wheels salvaged from reversed garbage made for some vibrant mandalas that were diverse in design but unified in creative context.
According to Natasha, the cable wheels when sealed and primed permit writing, drawing, painting, nailing and collage, while the wheel is turned by hand. Representing the mental, emotional and spiritual states of being, these concentric energy circles or mandalas have been a part of Natasha’s practice for over ten years.
The narrative and vibrant colours of several of her works on un-stretched canvass also grabbed the eye with their strong motifs, lovingly endowed with intertwined branches and interwoven patterns, images and design. Some paintings were innovatively suspended to hang and fall into folds to resemble textile.

“I increasingly make my own images such as photographs from my life and environment, places that I travel to, people that I meet or see, photographs of existing works, and these images are collaged onto ongoing work,” said Natasha.
Her exhibition allows you to touch and explore the artwork, particularly the artistically liberating memory books and reinvented dolls. An interest in goddesses that embody multiple truths and reside between realities and myth, inspired Natasha’s collection of doll goddesses.
Painting, varnishing, drawing and dressing them through intuitive and sensitive play, the artist has created an evocative interpretation of human figures. You either get drawn to its uniqueness and deviation from the norm or are shocked at the risk-taking exploration.
Similar response was received during the collateral art workshop conducted by Natasha at Dandenong Library with participants overcoming their initial reluctance to create something unusual from preloved books sourced from Salvos. Through chopping, changing, painting, drawing and challenging of the conventional book format participants created sculptural objects that would provide them with creative joy for years.
Natasha’s performative drawing on the outer glass wall of Walker Street gallery arrested people’s attention, as did her unique art that championed a distinctive, nurturing and self-reflexive approach.