Narendra Modi lookalike to contest against PM in 2019 elections 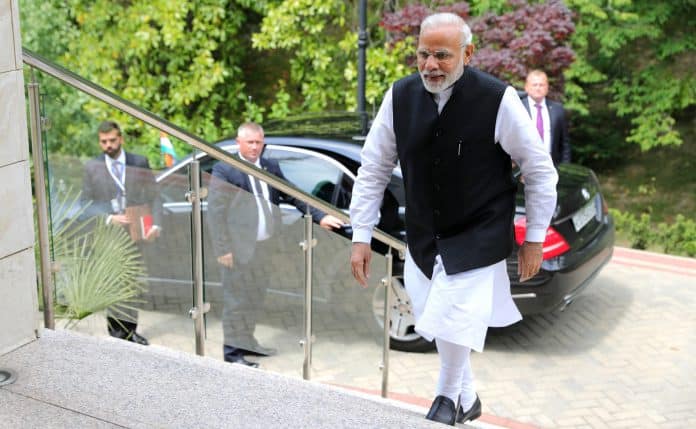 Reading Time: 2 minutesPrime Minister Narendra Modi and Union Home Minister Rajnath Singh now have an unusual candidate pitted against them: Abhinandan Pathak, a lookalike of Modi, who is contesting form Lucknow and Varanasi as an independent candidate.
Pathak, 51, had campaigned for Modi in Varanasi and became a celebrity overnight with his strong resemblance to the Prime Minister.
“When Modi became Prime Minister, I gained recognition and respect. My resemblance with him was my biggest asset and the common people would offer me tea and request for a photograph with me. After demonetization, things began to change and as disillusionment set in, I became a victim of the people’s anger. There have been incidents where I have been beaten up only because I resemble Modi,” he said.

Pathak switched his loyalty to the Congress and campaigned for the party in Madhya Pradesh and Rajasthan.
“I am upset with the Congress because the party did not give me a ticket in these elections. However, I still support Rahul Gandhi and his policies,” he said.
Abhinandan Pathak has been living in Lucknow for five years and works as a priest to earn a living.
He said he was contesting elections to develop his own identity. “I am fed up of living in someone else’s shadow. The main issues of my campaign will be the need for roti, kapda aur makaan”, he said.
Pathak is a native of Saharanpur and has collected the security money for nomination through crowd funding. “I am asking for one rupee and one vote from the people and the response has been encouraging,” he said.
In his affidavit filed with his nomination, Abhinandan Pathak says he has no immovable assets and only Rs 50,000 in his bank account. He has done his Master’s from Allahabad University.
All the ten proposers in his nomination papers are Muslims who are also his closet friends.
Pathak has contested four elections so far, twice for corporator in the Saharanpur municipal elections, the 1999 polls, and assembly elections from Saharanpur Nagar in 2012. He had also filed a nomination in 2017 assembly elections in Varanasi, but his candidature was rejected. He has challenged that decision in court.
Pathak is separated from his family that includes his wife and six children.
IANS

- Advertisement -
Share
WhatsApp
Facebook
Twitter
Linkedin
Previous articleGandhi looks towards the future in new mural in New York
Next articleStop this China obsession, India is more your cup of chai