Nain Singh Sailani: We will remember you 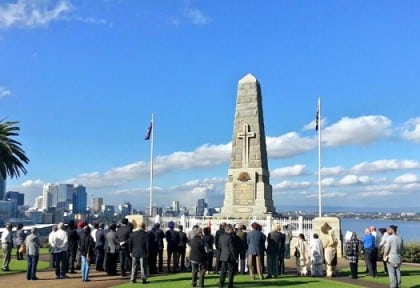 Reading Time: 4 minutesAn Indian-origin Australian soldier from WWI is honoured in Perth
Private Nain Singh Sailani, an Indian-origin Sikh soldier who gave his life for Australia in World War I, was honoured at a special service in Perth on 1 June.

It was his 100th death anniversary.
Private Nain Singh Sailani, who wore the service number 658 of the 44th Battalion Australian Infantry AIF, was killed in action in Belgium during World War 1.
His sacrifice to his adopted country was remembered with honour at the State War Memorial, Kings Park.

Many members of Perth’s Sikh community, and dignitaries from the mainstream were present to honour the unsung story of this Sikh braveheart. The ceremony was organised by the Sikh Association of Western Australia supported by Amit Kumar Mishra, Consulate General of India, Perth.

Private N. S. Sailani was born in Shimla, India, in 1873. He arrived in Geraldton, WA in 1895, probably aged 22. In his initial days he worked as a labourer and had even applied for mine licence once. There is evidence that he used the Perth General Post Office to receive his mail. He was friends with a Mr Cyril Coleman, who he nominated as executor of his will.

He was 43 when he volunteered for Australian Imperial Force in 1916 and was allotted to the 44th battalion for his clear records. During his deployment in France, his work was dangerous and risky, serving in the frontline. Australian War Memorial records show that his battalion was involved in heavy battle against the Germans during late May and early June, 1917. It was at this time that Nain Singh Sailani was killed.
Nain Singh’s mother allowed for his burial to take place in the Strand Military Cemetery in Ploegsteert Wood, Belgium.
Mr Tarunpreet Singh of Australian Sikh Heritage Association (ASHA) and Mr Gurdarshan Singh Kailey, President SAWA, addressed the attendees and extended thanks to Colonel John Tick, President of  Army Museum of WA, Mr John Sweetman, World War History society, Mr Richard Offen Executive Director Heritage Perth.

Tarunpreet Singh said on ABC Radio later that the contributions of Private Nain Singh and others like him must be highlighted to the mainstream, to show that in the hour of need, they will stand up, and lay down their lives if called for.
CG Amit Mishra mentioned that stories such as those of Nain Singh remind us that Indians and Australians have been comrades-in-arms for long.

The Australian Sikh Heritage Association (ASHA) has undertaken much research to bring to light the Sikh settlement in this country, particularly in service to its armed forces. It does this by researching information stored in various local, state and federal archives and private collections across Australia. It has just been awarded a $62,000 grant to produce a booklet based on its findings.

The participants at the State War Memorial laid wreaths at the memorial and observed a minute’s silence in remembrance of Nain Singh Sailani. His name is included in The State War Memorial Cenotaph at Kings Park.
When you next visit the nation’s capital Canberra, go and locate Nain Singh’s name on the Roll of Honour at the Australian War Memorial. It is located at 138 in the Commemorative Area.
This year, the Australian War Memorial is honouring the gallantry of our fallen soldiers by projecting their names onto the exterior of the Hall of Memory. Private Nain Singh Sailani’s name is scheduled to appear at the following times
Sun 11 June, 2017 8:37 pm
Sun 23 July, 2017 7:52 pm
Thu 7 September, 2017 11:43 pm
Thu 2 November, 2017 12:41 am
Sat 6 January, 2018 5:06 am
In a special ceremony this weekend, Sat 10 June 2017, the Australian Indian Historical Society (AIHS) along with local bodies is organising a wreath-laying ceremony at the Australian War Memorial in honour of Nain Singh Sailani and another Indian-origin soldier Sarn Singh Johal, who also died on the battlefield in Europe in 1917. Historians Crystal Jordan and Len Kenna of the AIHS have been researching Sikh history in Australia since 1985.