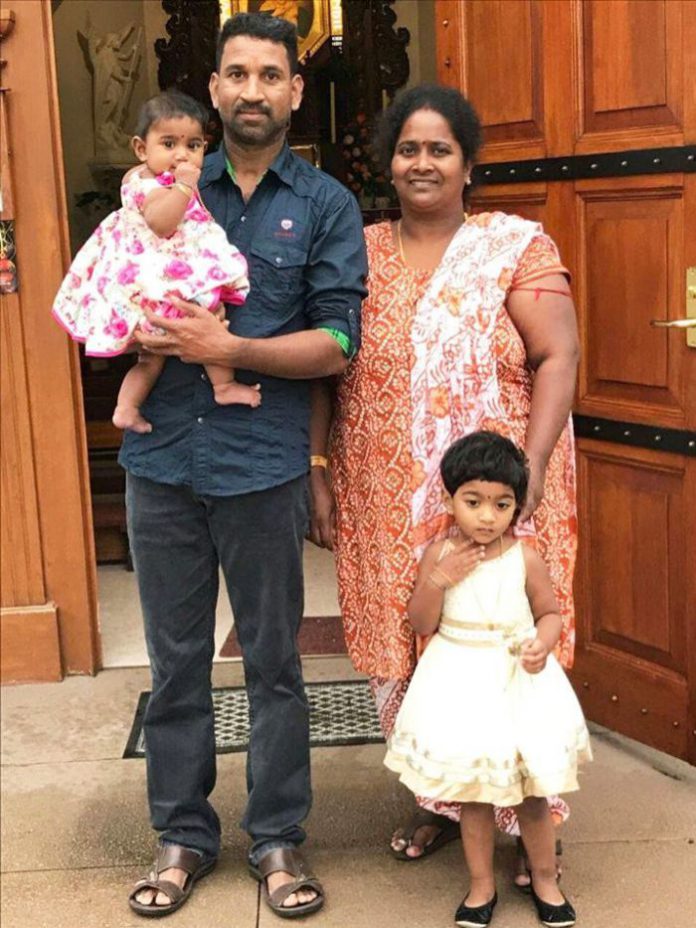 Reading Time: 3 minutesThe dichotomy that is Peter Dutton is perhaps best revealed by the stark contrast between his treatment of a European au pair who was due to be deported from the country in 2018, and a Tamil family of four who, at the time of writing, sit nervously in a Christmas Island detention centre. Last year, the Minister for Home Affairs intervened promptly to prevent the deportation of an Italian au pair employed by his former Queensland Police colleague, with senior officials being called upon late at night to ensure the young woman did not even spend a single night in detention. Yet despite repeated pleas on both sides of the
political divide, Dutton remains unmoved by the plight of Nadesalingam, Priya and their two children Kopika, 4, and Tharunicaa, 2, as they seek to return to their home of Biloela in
Central Queensland.
The Nades couple, who came separately to Australia by boat in 2012 in 2013, still carry with them the physical and mental scars of the bloody Sri Lankan civil war which has displaced hundreds of thousands of Sri Lankan Tamils. Priya saw her fiancé and five other men from her village being burned alive, while Nades bears scars and shrapnel from a bomb detonated by government forces.
Having fled the conflict and settled in Australia, where their two young girls were born, the family have been fighting their latest battle from the confines of a Melbourne detention centre since Priya’s bridging visa expired in March 2018. Before that, the family had spent three years building a life in the rural community of Biloela, where Nades works in the local
meatworks. It was 5 in the morning when that world was torn from them, with the then 7 month-old Tharunicaa and 2 year- old Kopika taken from their beds and the family given just ten minutes to pack up their lives before they were transported to the MITA detention centre in Melbourne.
Last month, the Nades family was initially deported by the Australian government by private charter plane bound for Sri Lanka from Melbourne – incidentally, under a three-year contract with the company Skytraders valued at $78 million. It was only a last-minute Federal Court injunction that halted the flight and forced it to land in Darwin, with the court ordering that the family must not be expelled until a further hearing is held regarding the
younger daughter’s claims for asylum protection.
Yet that reprieve only saw the family flown to Christmas Island, creating logistical issues for lawyers seeking access to the family, while raising concerns for the welfare of the young children. Aran Mylvaganam of the Tamil Refugee Council noted, “The children are constantly crying. Kopika is feeling very lonely, and they are the only refugees on Christmas Island at the moment”.
The family, its lawyers and its supporters across the country argue that Sri Lanka continues to be unsafe for Tamils, particularly since the replacement of Prime Minister Ranil Wickremesinghe with feared former President and strongman Mahinda Rajapaksa in October last year, as well as due to the family’s now public profile. “It is not safe for my husband, it is not safe for me because of the government,” says Priya. “We are all over the news. They know [Nades] has been in the LTTE (Tamil Tigers)”.
Dutton disagreed with that assessment, arguing that the family should “accept that they are not refugees, they’re not owed protection by our country”.
Yet Dutton’s statement entirely misses the point: the argument is not whether protection is “owed” by Australia. That battle has already been fought in the courts, albeit raising other issues regarding the way Australian law deals with settled asylum seekers. After all, the judiciary can only apply the law as it is written.
The point is that Dutton and his Ministry saw fit to forcibly remove from Australia a young, well-liked and hardworking family settled outside the congested capital cities, while having in the recent past exercised all available powers to ensure the residency of those from European backgrounds in far less compelling circumstances. In this sense, Dutton has not only the power but the responsibility to exercise his discretion more consistently and with greater regard to the principles of natural justice.
Even conservative commentator Alan Jones – whose own views regarding immigration are typically aligned in every respect with the Coalition’s – has called on the government to abandon the deportation, calling the situation “shameful”.
It is indeed embarrassing, even with Australia’s dismal human rights record, that the government can so wantonly disregard not only the views of its constituents, but the very mantra which brought it into power: “If you have a go, you get a go”. For Dutton and Morrison, that philosophy comes with a very important footnote: getting a go depends on the colour of your skin and the socio-political capital of those whose company you
keep.