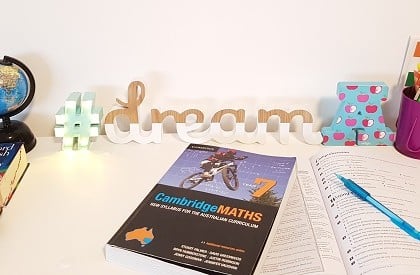 Starting high school is a time full of fun, excitement and new experiences

Orientation days, introductions, the principal’s opening speech… it went on and on. I was getting impatient, when was the real stuff going to start? Finally, after what felt like an eternity, the first bell rang and everyone rushed to class. I watched in amazement at how the other students all paced from one class to another balancing their laptops and books so well!

Going from class to class – now that’s a change from Year 6!

Everyone made a big deal of it and I wondered what I would do if I ever got lost in between classes. It was a secret fear, but LOL, it’s all behind me now!
All the Year 7s were grouped in their house colours and we played the mandatory getting to know each other games. Then we had a full house meeting from Years 7 to 12 and talked about our swimming carnival and our dress up theme… The Wiggles!

Following this we met our “big sisters” who gave us all letters about themselves and small presents.

What a sweet gesture. They looked so confident. Will I be like them one day? My “big sisters” gave me some useful stationery and loads of mints. They seem nice. I have run into them a couple of times since.

During the course of the day I looked at my show bag and saw this weird looking padlock thing inside.

I was told it was a lock that I had to use to lock and unlock my school locker. Soooo not used to locks! I struggled with it to start with. It turned out to be a nuisance, especially when I was rushing for a class. Luckily, after a few attempts I got the technique. I mostly keep text books and a copy of my timetable in there at the moment, but I feel inspired to personalise my locker when I look at some of the cute things other girls have decorated their lockers with. My wishlist is cute magnets and some inspiring quotes to display on it. Some inspiration will come in handy for sure. High school schedules are hectic, no kidding!

It was a completely new world with no known faces. I realised making friends was not that easy, but not that hard either.

Orientation day came in handy after all as the girls I’d met there were friendly and I initially had a group to sit with. Soon my circle expanded to girls who had the same timetable as me and now I’m loving the different interactions. I sometimes think about how everyone else is feeling inside. Did the other new starters have the same fears as me? Nobody’s telling. But we are all trying to be ‘big girls’ now.

The other massive challenge, travelling by train ALONE!

It is natural to get stressed with thoughts like, ‘What if I miss the train or miss my station’ and all that stuff, but I realised you can get used to it in a few trips.
I am feeling a surge of confidence already. I like my new high school life!