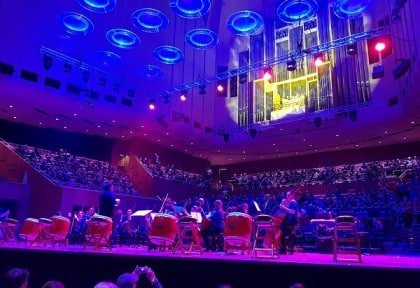 One minute NAPLAN test, next an Opera House show: it’s all in a day’s work in Year 7

Term 2 makes me seem busier than an ant! I have been so busy it doesn’t even feel like I have had a break! The main thing that has kept me so busy is NAPLAN practice, since that was imminent. The actual NAPLAN tests turned out to be not as tough as the practice papers which I think was a bit strange, really.

On the same day as the Numeracy NAPLAN test, my school had its grand Opera House concert. This made our day seem truly never ending!
That whole day, we rehearsed our songs and practiced getting on and off stage, which was a bit boring. After waiting and waiting for what seemed like many boring hours, the concert finally began. We were all busy waving to our parents as the lights dimmed, and we knew what that meant – it was show time!
Performing was the highlight and the boredom faded as we got to show off our talent. It all went like clockwork! Practice makes perfect, it is true. When the concert was over I was soooooo tired – yet I felt a great sense of accomplishment.

It’s a bit scary at the start of the term, because you have no idea what assessments teachers might throw at you. But it can turn out to be interesting. I really enjoyed my Geography assignment which I got last term and which was due at the start of this term. It was an intensive research project where I had to write a 500-700 word information report about a sensitive environmental site.
I chose Maui in Hawaii, USA. I had to work using a detailed Research Action Plan (RAP). Have you ever heard of this? Well, I hadn’t. It was interesting at the same time as being a bit nerve-wracking. It involved actually interviewing someone who has visited Maui, in addition to doing loads of research online. (Now I know where the word ‘research’ comes from: you search, then search again, and then search some more!)
After researching and interviewing, I was able to put together approximately an 850-word report. At the end, after submitting my assignment, it felt like I had actually been to Maui!

Word Nerd
I’ve been learning LOTS of new words. I’ve decided to share a new (nerd) word with you each month.
I love the new words I am learning in science. Like PARAMECIUM, which is my Nerd Word for this month.

I made an informative poster all about Paramecium. Paramecium is a single-cell organism that doesn’t have a brain or a heart, but still has the ability to learn. When I researched about Paramecium, I thought it was pretty cool.
Here’s a paramecium joke for you:
A paramecium and an amoeba are walking down the street. The amoeba asks, “So, lacking any legs, how do you manage to get around?
The paramecium replies “A cilia question I’ve never heard!”