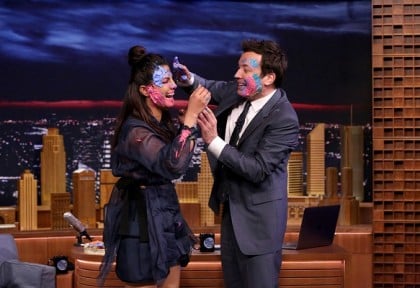 Holi is not a unique concept, there are celebrations in other cultures that involve a similar “letting go”

While Australia is now preparing for the onset of winter, in India it is spring. In the north at least, the weather is becoming pleasant, with the chill of the last three months gradually receding. Nature adorns herself with brightly coloured flora, and the humans unabashedly imitate: it is Holi, the spring festival of colours.
In the most popular form of celebration of this northern Indian festival, revellers smear coloured powder on each other’s faces, or throw them at each other in gay abandon. There’s plenty of laughs and loud merriment; and of course, food and drink abound, as in all Hindu festivities.

Often the festivities get boisterous, such as when people bring out water pistols, buckets of coloured water, or dunk each other in the pool.
Distinctions of class, caste, colour and creed are all dissolved as participants indulge in good-humoured play.
There are many legends and myths behind the tradition of Holi, but these are rarely remembered in contemporary times. Ask India’s much-advertised “youthful” citizenry about the significance of the festival, and they will probably say something vague that includes the terms Holika, burning, Krishna, Gopikas … and if pressed further, they’ll find refuge in Google or Wikipedia. But they will tell you Holi is a feel-good festival – a mega party in which the main element is to have fun; and that it is a celebration of equality, a celebration of life itself.
And of course they will be right.
Typically, rules are lax, in this festival. Anything goes. (Within limits, of course). Bura na mano … is a common Holi utterance. Boys and girls, who traditionally keep their distance, freely mingle. Harmless, playful flirting is allowed.
Even the intoxicating bhang is permitted: made from the leaves and buds of the cannabis sativa (indica), this concoction is consumed as a drink, or eaten in sweets or pakoras.
In short, at Holi, usually ‘unacceptable’ behaviour becomes acceptable, if only for a day. Breaking the rules is sanctioned.
And it is all taken in a spirit of good old-fashioned fun.

Perhaps it is in this spirit that we find the true significance of the festival. Caught up in the drudgery of regimented daily lives, it is therapeutic to “let go” once in a while, kick those heels up, have a great big belly laugh. (Gen-Y readers, those ancient Indian sage-type dudes were on to something …)
Holi is not a unique concept. There are celebrations in other cultures that involve a similar “letting go”. In the Greek town of Galaxidi, for example, at the beginning of the Eastern Orthodox Lent, people celebrate by throwing flour at each other, sometimes coloured flour. (Flour is a symbol of life). They also paint their faces in charcoal, and dance on the streets.
Apparently, in this church-sanctioned festival, people are allowed to indulge, just ahead of the festival of Lent which is marked by self-denial, i.e. fasting. Foods that cannot be eaten at Lent, such as meat, dairy and fat, are especially consumed.
The Bolivar province of Ecuador celebrates the annual Carnival festival, in which people gather in the town square and spray each other with coloured dyes, water or flour. Children shoot water-filled balloons at each other (a favourite Holi occurrence). And just like Holi, this is also a festival of joy, with food and drink and singing and dancing.
The Thai New Year festival Song Kran is also marked with flour and water throwing – the festivities seem markedly similar to our own Holi.
The Tibetan New Year is also welcomed with the throwing of flour: flour is seen as a symbol of good luck.
We hope you indulged a bit this Holi – was it good for you?