Much-anticipated movies to catch when the lockdown ends

Movie releases that were postponed due to the pandemic have received tentative new dates. 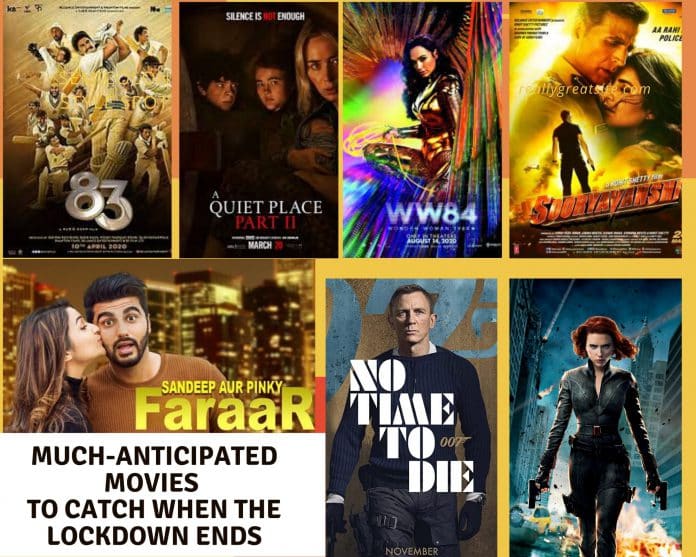 With the coronavirus pandemic escalating drastically within weeks in March, many movies release date around the world had to be postponed to meet social distancing measures. With most of them receiving new release dates, what are the exciting movies we get to watch in 2020?

This exciting sports-drama movie is about the Indian cricket team that won the 1983 World Cup. Starring Ranveer Singh as Kapil Dev, Deepika Padukone as his wife Romi Bhatia Dev, and Tahir Raj Bhasin as Sunil Gavaskar, 83 was originally supposed to release in 2019 but was pushed back due to delays in pre-production.

No Time To Die

The upcoming James Bond film will be Daniel Craig’s last outing as the fictional MI6 agent. In No Time To Die, his nemesis is played by none other than Rami Malek, fresh off his Best Actor win at the Oscars. It also features Phoebe Waller-Bridge (of Fleabag and Killing Eve fame) as the second female writer ever in the Bond franchise.

Sooryavanshi was originally supposed to release this past March but it has been postponed indefinitely until the pandemic is resolved. Another reason to eagerly await the end of the lockdown!

After Wonder Woman received universal acclaim in 2017, we just knew there would be another one! This sequel marks the return of Gal Gadot as Wonder Woman alongside an impressive cast of Chris Pine, Kristin Wiig, Pedro Pascal, Robin Wright and Connie Nielsen. Like the name suggests, Wonder Woman 1984 takes us back in time to face off against Maxwell Lord and Cheetah.

It was announced that the film will be released on 14 August, 2020.

This John Krasinski direction was one of the first movie impacted by the coronavirus pandemic, having had its world premiere in the first week of March but ultimately postponing its release. Emily Blunt, Millicent Simmonds, and Noah Jupe reprise their roles as the Abbott family surviving in a world inhabited by blind extra-terrestrial creatures. This sequel also features Cillian Murphy (star of Peaky Blinders) and Djimon Hounsou (from Blood Diamond and Gladiator).

Although Sandeep aur Pinky Faraar was meant to release in March 2020, we have no word (yet!) about a new release date.

With Avengers: Endgame bringing a close to one major chapter in the Marvel Cinematic Universe last year, audiences around the world were itching for a new Marvel film. In Black Widow, we get to see Natasha Romanoff/ Black Widow (played to perfection by Scarlett Johansson) confront her difficult past while she’s on the run. Other big names in the project include David Harbour (from Stranger Things), Florence Pugh, and Rachel Weisz.

Marvel’s Black Widow, the newest film in Phase Four of the Marvel Cinematic Universe, will hit cinemas on 6 November, 2020.