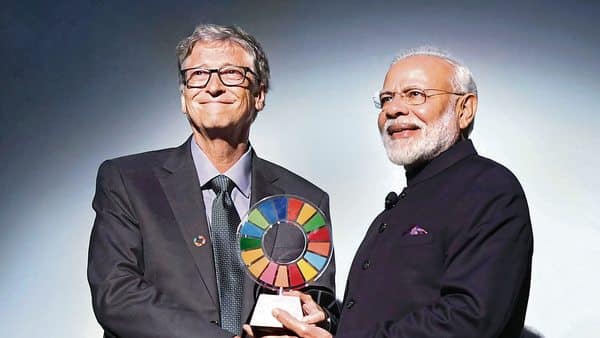 Prime Minister Narendra Modi was conferred the Global Goalkeeper Award by the Bill and Melinda Gates Foundation for the Swachh Bharat mission. The PM said the honour bestowed on him was for the millions of Indians who participated in the mission.

He said receiving the award on Mahatma Gandhi’s 150th anniversary is especially significant for him, for it shows people’s power – of the determination of 1.3 billion people to achieve any goal.

Modi said that when he first talked about the Clean India campaign five years ago, there were “different reactions”, but “if you are committed to your goal then these are of no importance”.

“What is important is the united efforts to make India clean and the development of a mindset in 1.3 billion Indians, and every single effort that people make for this effort. I therefore dedicate this award to those who made cleanliness the highest priority in their daily lives,” he said.

He said the success of the Clean India mission has benefited women the most, as in rural areas women had to wait for it to get dark to venture to the fields to relieve themselves. “For mothers and sisters, not having a toilet at home is the biggest difficulty, it also goes against their self-respect,” the PM said.

He said lack of toilets in schools would force girls to give up their studies and sit at home.

He said the Clean India Mission has also helped save thousands of lives, and cited a WHO report that said building toilets in homes helped save 300,000 lives. He cited a UNICEF study that said that every family with a toilet will be able to save Rs 50,000 a year, while a Bill and Melinda Gates Foundation report said that increase in sanitation has improved the BMI of women.

He said the main objective of the UN is to make peoples’ lives better and the Clean India Campaign plays an important role in achieving the UN goal.

He said that the construction of so many toilets had also generated employment opportunities for poor people in rural areas.

“Our government has tried to change governance to cooperative federalism in the way different states have taken part in the campaign, through creating awareness, constructing toilets, through training. The states were given full assistance to fulfil the resolution,” he said.

Modi said that states now compete among themselves to rank higher in a cleanliness survey competitions.

Modi said that India is ready to share its experiences with other countries.

“India is very close to achieving its goals, we are working at a fast pace. Through Fit India movement for preventive healthcare, and we have made 2025 the target to make India Tuberculosis free. We are making fast progress in the National Nutrition Mission, and will be able to overcome malnutrition. The Jal Jeevan Mission has been launched to provide regular supply of clean water to every home. We have also decided to stop single use plastic by 2022,” said Modi.

“I have complete faith in 1.3 billion Indians,” he said. He was conferred the award by Bill Gates at an event on the sidelines of the UNGA.

Union Home Minister Amit Shah congratulated Prime Minister Narendra Modi for receiving the ‘Global Goalkeeper Award’, saying it is a recognition of new India’s resolve for cleanliness under his leadership.

“The Global Goalkeeper Award conferred by the Bill and Melinda Gates Foundation to PM Modi is a recognition of new India’s resolve for cleanliness under his leadership.I congratulate PM Modi for his relentless efforts in the field of sanitation and to make Swachhta a Sanskar in India,” Shah tweeted.

Hollywood actors Riz Ahmed and Jameela Jamil did not attend the fourth annual GoalKeepers Award ceremony. It is widely believed that both the actors have pulled out of the event because of the current restrictions in Kashmir, the reports said.

Rajasthan-based activist Payal Jangid, 17, has been honoured with prestigious ‘Changemaker Award’ by the Bill and Melinda Gates Foundation at the Goalkeepers Global Goals Awards held in New York in recognition of her work towards the abolition of child marriage in her village, Hinsla and other neighbouring areas.

Jangid, who is one of many torchbearers of Nobel Laureate Kailash Satyarthi’s legacy and who lives in a Child-Friendly Village (Bal Mitra Gram) situated in the desert state of Rajasthan, expressed her happiness over the global recognition. “I extend my deepest gratitude to my mentors, Kailash Satyarthi and Shrimati Sumedha Kailash for giving me an opportunity to work towards the promotion of child rights,” Jangid said.

“It is because of them that I have been able to raise my voice against the social evil of child marriage and stopped my own marriage,” said Jangid.

“This recognition will further encourage me to continue my fight to end all forms of exploitation of children”.

Jangid, as the President of her village’s Children’s Parliament (Bal Panchayat), has undertaken a slew of field activities in the past to empower women and children of her own village and villages nearby, Kailash Satyarthi Foundation said.

“Jangid’s parents decided to marry her off when she was only 11 years old. She raised her voice against child marriage, as a result, her parents relented and the marriage was prevented.

“Thus began her campaign against child marriages in her village and the adjoining areas. She planned rallies, organised protests, and engaged with various women’s groups and youth forums of her village and surrounding villages.

“Today, as a child rights advocate, she has been encouraging children to unite and raise their voices against injustices done to them. She has made a significant contribution to her village administration leading to the betterment of the lives of the children of her village,” said the foundation.

Satyarthi said young people like Jangid are using their powerful voice to change the world. “Thanks to people like Payal Jangid. Change and hope are knocking on our doors. The world needs to be prepared for this new generation of activists. Their activism, dedication and bravery are already moving leaders to make changes and I know there is more to come.”

Earlier in 2013, on the basis of Jangid’s extensive work towards protection of the rights of children, she was chosen as a member of the jury for the World’s Children’s Prize, said the foundation.

In 2017, she also received the ‘Young Achiever Award’ by the global sports and fitness brand Reebok, said the foundation, adding Jangid is the personification of the award and she will continue to fight for the rights of children.