Modi is bringing Nehru jacket back in fashion 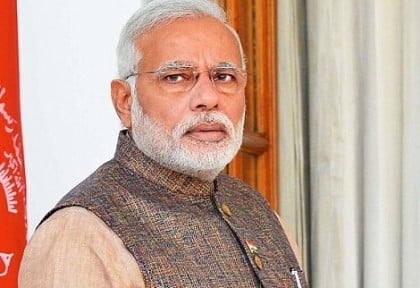 When the first independent prime minister of India, Jawaharlal Nehru was featured in Vogue, his distinctive close fitting, single-breasted jacket briefly became an important fashion statement for the Mod movement.
The Nehru Jacket was worn by everyone from the Beatles to Sammy Davis Jr.

Now Shantanu Mehra, of the popular Indian designer duo Shantanu & Nikhil, believes that Prime Minister Narendra Modi is making the traditional Nehru jacket fashionable again.
“Our PM Modi is bringing the traditional Nehru jacket back in fashion. Though most of the politicians are either wearing western outfits or typical Khadi and white kurtas, they are not wearing such traditional outfits,” Shantanu said.
“I feel that way, Modi is donning Nehru jackets that can inspire many young politicians to follow and make their fashion statement,” he said.

“I think they need to groom themselves (politicians) better. They should wear more stylish outfits that will not only make them look good, but also make our country proud and fashionable. A Nehru jacket is apt for that,” he said.
The designer duo, known for fusing history and heritage with modern elements in their fashion, unveiled their new collection Kashmiriyat 1990 at the menswear fashion event Van Heusen and GQ Fashion Nights 2016 here on Saturday.
While last year the duo worked on a theme of Partition of India and Pakistan, this year their work was the reflection of equality and unity in the diverse culture of Kashmir.

Shantanu said: “We are going back to history and bringing back those memories through our fashion. Last year, when we worked on the partition theme, we intended to convey how we parted on a positive note.”
“This year, when we attempted to redefine Kashmiriyat of 1990, we highlighted on the unity in the diverse Kashmiri culture where there is a celebration of religious equality, a Kashmiri who possesses the sense of belonging as a Pandit or a Muslim.”
Politically, the valley is going through a turmoil situation. But the designer said: “The sense of belonging is the ray of hope that young Kashmiris have in their mind. There are Kashmiri folk singers and rock bands who performed at our shows that came all the way from Kashmir. Their songs, their music says that they live in hope. We celebrate that.”