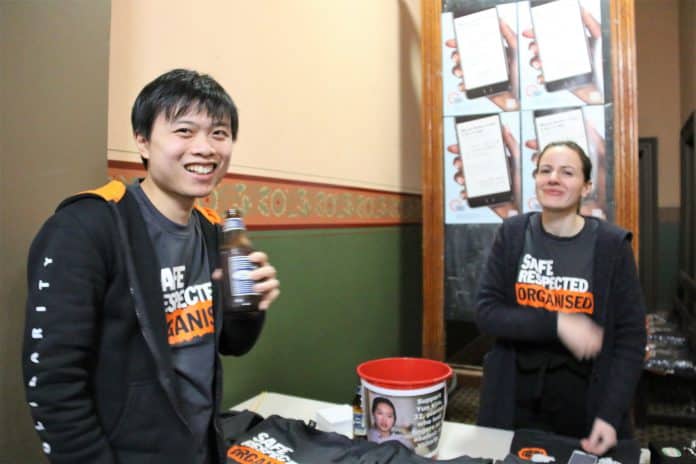 Reading Time: 3 minutesMigrant workers in Victoria are sometimes treated differently. Language and cultural barriers, insecure employment arrangements, discriminatory characteristics and sometimes precarious visa conditions, make migrant workers vulnerable. A hub to empower migrant workers to understand their rights and employment conditions was launched in late August.
The Minister for Multicultural Affairs Robin Scott unveiled the Migrant Workers Centre (MWC) at the Victorian Trades Hall. Supported by Luke Hilakari, Secretary of Victorian Trades Hall Council and George Lekakis, Chair of the MWC Board, the MWC has received a $2 million grant from the Victorian Government to fund its operations over two years.

The MWC helps migrant workers in Victoria connect with other migrant workers, professionals and social workers to help them navigate through difficult times, unreasonable employment conditions and a denial of their rights.
The MWC works with legal service providers such as community legal aid centres, unions, information providers and other related organisations to support those in need and refer them to an agencies that can assist.
The MWC strives to ensure that the playing field is fair for both parties in an employment and contracting relationship. Key issues faced by migrant workers include, among others, underpaid wages, unreasonable working conditions, limited training, failure to mitigate occupational health and safety risks, poor explanation of employee rights, being treated as casuals, and being misled about the specifics of their employment.

Two poignant examples of abuse to migrant workers were shared during the evening.
A cleaner described the mistreatment she received when working for a large organisation. The employer would dissuade her from joining the union and threatened to give her less shifts if she was seen to be engaging with union officials on site. She had to resort to subscribing to the union in her car in fear of retaliation from her employer.
A hospitality worker shared his views about the working conditions he faced whilst on duty. With poor support, limited resources and insufficient guidance, he felt lost trying to navigate himself in his new role. Not knowing where to seek help, he did not speak up in fear of losing his job.

Scott said he was aware of these issues. “This new centre will better protect and support migrant workers and international students, who we know are more vulnerable to exploitation at work,” he said. “They are critical to the strength of our community and our economy – it’s essential we give them the information and support they need.”
Minister for Industrial Relations Natalie Hutchins added, “The Migrant Workers Centre will play a critical role in providing migrant workers and international students with the knowledge and tools to exercise their full employment rights.”
Two goals for the MWC in the first year include:

Sam Jiayi Liu, Media and Communications Officer at MWC, noted, “It is important that we connect with migrant workers and liaise with organisations to help empower them to stand for the rights”. The MWC will host monthly information sessions commencing this month to discuss topical issues.
The work of the MWC will be complemented by the $300,000 Multicultural Safety Ambassadors Program, which will recruit individuals from multicultural communities to promote safe workplace practices. The MWC is on the lookout for volunteers, especially those fluent in foreign languages.
For more information visit mwc@vthc.org.au or contact 03 9659 3516.