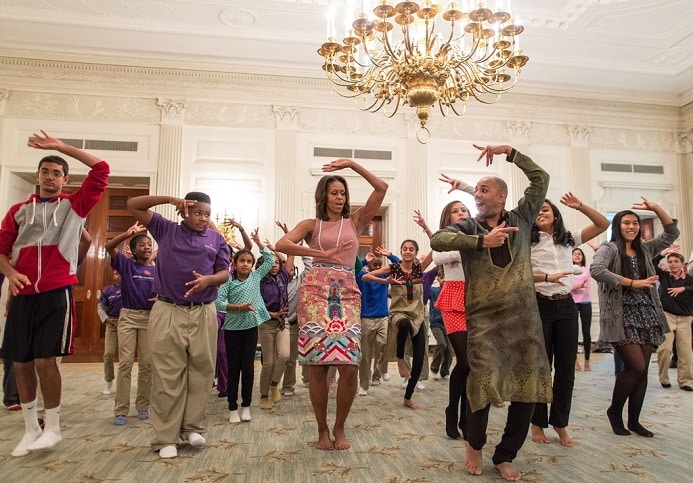 US First Lady Michelle Obama lit a diya (lamp) in the East room to start White House Diwali celebrations after trying out some Bollywood dance moves with some local students in the State Dining Room.
“We’ve celebrated this holiday here at the White House every year since (President) Barack (Obama) took office. And there’s a reason why we’ve done that,” she said, welcoming guests including members of the Indian community and Indian-American officials on Nov 5.
“We got to practice a little Bollywood this afternoon,” Michelle Obama said.
“And, of course, as you all know, I think I can dance” she proudly informing her guests amid laughter. “But not as good as they can dance. But we had a wonderful time.”
“It was the first time that we did Bollywood in the State Room here at the White House,” said the First Lady who had joined a dance number during Diwali celebrations in Mumbai during Obamas’ India visit in November 2010.
Joining the celebrations was her dance teacher Nakul (Dev Mahajan ) in “his jeans and t-shirt now” “from one of my favourite shows on the planet – So You Think You Can Dance”.
Also present was India-born fashion designer Naeem Khan who had designed her dress her for the occasion.
“When we say that we want to make the White House the ‘people’s house,’ we mean all people. We mean that we want to honour and embrace all of the many cultures and faith traditions that make us who we are as Americans. And Diwali is very much one of those traditions,” she said.
“It’s a time to come together with friends and family, often with dancing and good food,” said Michelle Obama noting Diwali is celebrated by members of some of the world’s oldest religions not just here in America but across the globe.
“But Diwali is also a time for contemplation and reflection. It’s a time for us to think about our obligations to our fellow human beings, particularly those who are less fortunate than we are,” she said.
“And as we light the diya we recommit ourselves to the triumph of light over darkness, of good over evil,” she said recalling the shooting tragedy at a Sikh Gurdwara in Oak Creek, Wisconsin last year “when an act of unthinkable violence shook a community to its core.”
“But I am also thinking of how in the face of such evil, we also witnessed the power of goodness and forgiveness,” Obama said.
“The families and community leaders I met when I visited Oak Creek just weeks after the tragedy, they showed us such courage and grace,” she said. “Instead of giving in to bitterness or despair, they honoured those they lost through service.”
“I’m also thinking of all the people across America and around the world who held prayer vigils during that time and sent messages of love and support, and held the people of Oak Creek in their hearts.”
“I am so proud and so honoured to be celebrating this beautiful holiday at the White House with all of you,” the First Lady told guests. “And I wish you all and all your loved ones a Happy Diwali and Saal Mubarak.”
US lawmakers also joined the Indian-American community for the first ever Diwali celebrations on Capitol Hill after the US Congress passed resolutions honouring the Indian festival of lights and celebrating the strong relationship between the US and India.