We may not lose our glaciers permanently, but the human race's chances of survival are certainly bleak if we keep ignoring climate change, writes ANTHONY DOSSETO 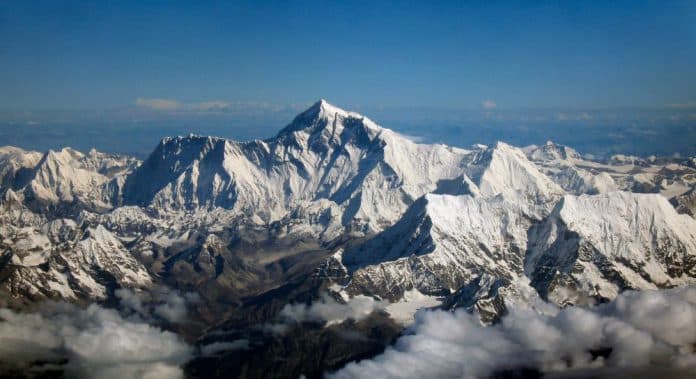 Reading Time: 4 minutesA new report has warned that even if global warming is held at 1.5℃, we will still lose a third of the glaciers in the Hindu Kush-Himalaya (HKH) region. What does that mean for rivers that flow down these mountains, and the people who depend on them?
The HKH region is home to the tallest mountains on Earth, and also to the source of rivers that sustain close to 2 billion people. These rivers supply agriculture with water and with sediments that fertilise soils in valleys and the floodplain.
Some of these rivers are hugely culturally significant. The Ganges (or Ganga), for instance, which flows for more than 2,525km from the western Himalayas into the Bay of Bengal, is personified in Hinduism as the goddess Gaṅgā.

When it rains, it pours… literally

Before we get to the effect of melting glaciers on Himalayan rivers, we need to understand where they get their water.
For much of Himalayas, rain falls mostly during the monsoon active between June and September. The monsoon brings heavy rain and often causes devastating floods, such as in northern India in 2013, which forced the evacuation of more than 110,000 people.

But the summer monsoon is not the only culprit for devastating floods. Landslides can dam the river, and when this dam bursts it can cause dramatic, unpredictable flooding. Some of those events have been linked to folk stories of floods in many cultures around the world. In the Himalayas, a study tracking the 1,000-year history of large floods showed that heavy rainfall and landslide-dam burst are the main causes.
When they melt, glaciers can also create natural dams, which can then burst and send floods down the valley. In this way, the newly forecast melting poses an acute threat.
The potential problem is worsened still further by the Intergovernmental Panel on Climate Change’s prediction that the frequency of extreme rainfall events will also increase.

What will happen to Himalayan rivers when the taps are turned to high in this way? To answer this, we need to look into the past.
For tens of thousands of years, rivers have polished rocks and laid down sediments in the lower valleys of the mountain range. These sediments and rocks tell us the story of how the river behaves when the tap opens or closes.

Some experts propose that intense rain tends to trigger landslides, choking the river with sediments which are then dumped in the valleys. Others suggest that the supply of sediments to the river generally doesn’t change much even in extreme rainfall events, and that the main effect of the extra flow is that the river erodes further into its bed.
The most recent work supports the latter theory. It found that 25,000-35,000 years ago, when the monsoon was much weaker than today, sediments were filling up Himalayan valleys. But more recently (3,000-6,000 years ago), rock surfaces were exposed during a period of strong monsoon, illustrating how the river carved into its bed in response to higher rainfall.

So what does the past tell us about the future of Himalayan rivers? More frequent extreme rainfall events mean more floods, of course. But a stronger monsoon also means rivers will cut deeper into their beds, instead of fertilising Himalayan valleys and the Indo-Gangetic plain with sediments.

Read more:
Devastating Himalayan floods are made worse by an international blame game

What about glaciers melting? For as long as there are glaciers, this will increase the amount of meltwater in the rivers each spring (until 2060, according the report, after which there won’t be any meltwater to talk about). So this too will contribute to rivers carving into their beds instead of distributing sediments. It will also increase the risk of flooding from outburst of glacial lake dams.
So what is at stake? The melting glaciers? No. Given thousands or millions of years, it seems likely that they will one day return. But on a more meaningful human timescale, what is really at stake is us – our own survival. Global warming is reducing our resources, and making life more perilous along the way. The rivers of the Himalayas are just one more example.

This article is republished from The Conversation under a Creative Commons license. Read the original article.