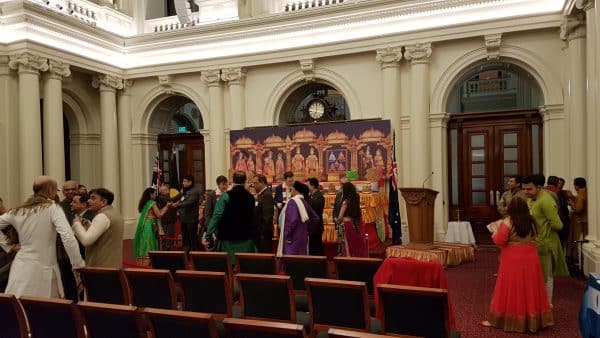 With its display of culture, festivities and a veritable mountain of sanctified food, the Diwali and Annakut Exhibition – hosted by the BAPS Shri Swaminarayan Mandir (BAPS SSM), Mill Park – was the perfect showcase of the Indian festival of lights.
The formal launch of the three-day exhibition took place on 18 September.
Over the past three years, the BAPS SSM, Mill Park, has hosted the exhibition to increase awareness of India’s famous festival amongst members of the Victorian community.
The formal launch of the three-day exhibition took place on 18 September. Ministers of Victorian Parliament, representatives from 18 participating associations, elders and volunteers of various faiths and organisations, and the general public witnessed the opening. The location for the event – the historical and architecturally remarkable Queens Hall of the Victorian Parliament – is a testament of Victoria’s multicultural community and increasing support for people from all over the world.
To clarify why the event was taking place in advance of the October Diwali celebrations, Sitesh Bhojani, of BAPS SSM, explained that the participating organisations wanted MPs and leaders in Victoria to learn about Diwali.
Following their understanding, Bhojani encouraged the MPs and leaders to support the Indian community in their electorate and participate in the functions. The timing was purposeful so that MPs and leaders could plan ahead and work with the community in October.
The event opened with a traditional Deep Pragatya (lighting of the lamps).Thaal Gaan and Nutan Varsha Aarti were played and sung.
MLC Bruce Atkinson, President of the Legislative Council, thanked the Indian community for sharing aspects of its religious and spiritual culture. “I am happy to participate in these events because I see the joy that these colourful and symbolic processions bring to the Indian community,” he added.
The spectacular display of the mountain of vegetarian food, Annakut, caught the eye of MP Matthew Guy, Leader of the Opposition Party. He let the audience in on a secret, saying, “I have always walked past the tiered display on my way to the chamber and wished that I could take a sweet.” The Victorian community certainly do share similar taste buds!
With approximately 150 people in attendance, the event required tireless support from its volunteers. The adults and youth who took part in the cultural performances represented ISKCON Melbourne, Jet Australia Foundation and Vaishnav Sangh of Melbourne. MP Colin Brooks, Speaker of the Legislative Assembly, commended all participants and noted that the selfless devotion of the participants was truly uplifting.
Diwali is a festival that is not confined to India anymore. All over the world, other cultures are celebrating this festival and embracing the value of doing good to others. It was important to note that Robin Scott, Minister for Multicultural Affairs and Finance, said that Diwali has become an important addition to the Victorian Parliament’s calendar.