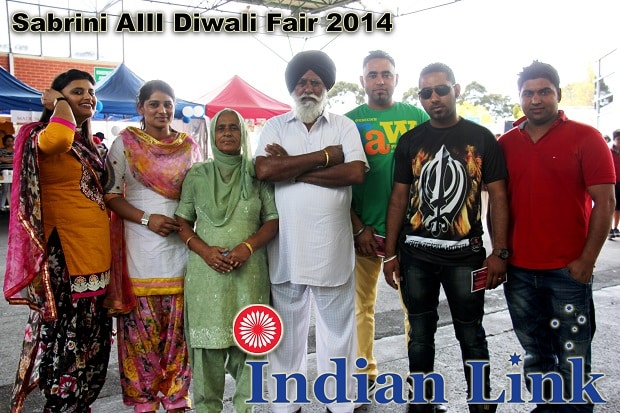 The piece de resistance at the recently held AIII Diwali Fair in Sandown was without doubt the turban sporting chef Harpal Singh Sokhi. The popular Indian TV chef was in Melbourne to launch Sabrini, a new brand of Indian food products, in association with Sabi Foods.

A major draw card to the event, Harpal Singh did not disappoint his innumerable fans as he whipped up delicacies on stage, putting on a show with lots of namak, shamak and oodles of funHarpal-style.

This was the 13th year of celebrations organised under the banner of AIII. Over the years there have been many changes in the agenda, presentations and sponsors for the event, however the underlying objective for observing Diwali remains a constant. AIII aims to replicate the authentic experience of the most anticipated of all Indian festivals in Melbourne and open it to the public so they can enjoy and participate.

Putting an event of this scale together involves months of planning, effort and innovation, said Hari Yellina, Vice President of AIII. “It’s like bringing Little India to Sandown,” Hari said.

“With over 80 stalls offering Indian fashion, food and fun there is an enormous amount of coordination required and the AIII team does a commendable job learning from previous experience and improving with every year.”

Besides the formal function that was held in the evening, a crowd pleaser was the Western Union Talent Show, that saw participation from various individuals and groups – and boy, does Melbourne have talent! One vibrant item succeeded another and it would have been a tough task to pick any winners.

Premier Denis Napthine graced the event with his presence along with many dignitaries and AIII committee members. A sizeable crowd from diverse multicultural backgrounds milled around the vast grounds relishing the street-style food and beverages including freshly squeezed sugarcane juice (ganne ka ras), an all-time favourite amongst Indians.

There was never a dull moment from the time attendees entered the gates. People were invited to meet local politicians representing both Labor and the Liberals. All major Indian media were present in strong numbers including an outdoor broadcast from SBS. Multiple businesses promoted their products and there were showbags galore on offer. Amidst a riot of colours and promotional material, plenty of efforts were made to attract attention.

It was a mela in the true sense of the word, a gathering like no other, with a kaleidoscope of activities to keep the senses engaged. The daylong event culminated in spectacular firework – the carefully orchestrated pyrotechnics transporting many ‘back home’ where Diwali is traditionally celebrated with fireworks in almost every Indian household.

“It may not be as much fun as being able to light them ourselves but it is definitely safer in the hands of professionals,” remarked someone in the crowd.