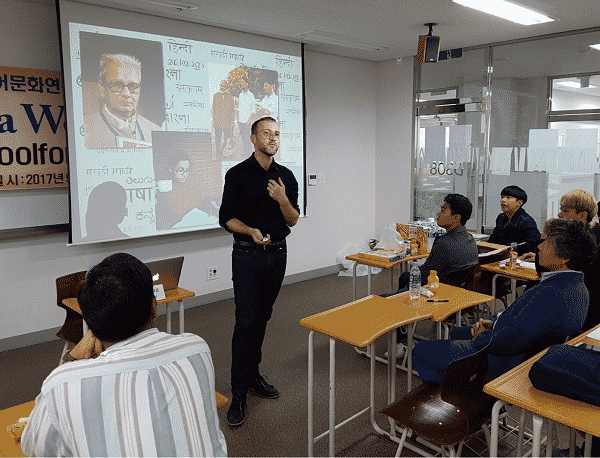 It was a consolidated campaign staged over three long months, but La Trobe’s Dr Ian Woolford received news this morning that made it all worth it.

The university’s Hindi program, slated to be terminated due to COVID-caused financial hardships, will be maintained with no cuts.

“It’s quite a relief,” Dr Woolford, La Trobe’s face of Hindi, told Indian Link. “I can hardly believe that the uni has come to this decision.”

Announcing the decision, the university’s Dean of Humanities and Social Sciences Prof Nick Bisley said, “After considerable discussions with stakeholders including staff, students, community groups and governments, we have decided to retain the current Hindi program. Notwithstanding the significant financial challenges we face, it is clear to us that it remains firmly in the university’s and country’s interest to retain the Hindi program.”

Buoyed at the decision, Dr Woolford said, “I am particularly heartened that the reason stated is that Hindi is vital to Australia’s national interest and therefore has a place at the university. As a Hindi specialist, I agree.”

Dr Woolford spearheaded a massive campaign involving various interest groups besides his own colleagues and students, dedicating all his energies into saving Hindi at the university.

“I reached out to staff and students from multiple departments and others who wanted to see it survive, the Indian community in Australia who wrote to the university and to their Members of Parliament asking for support, even academics in India. Support came from the Australian High Commission in New Delhi too.”

Hindi student Jessica Ellem, who coordinated the student response to the university, is over the moon at the announcement.

“I’m so glad to be starting my third year being able to continue Hindi,” she told Indian Link. “The uni has made a wise decision. The current financial situation is not ideal but it’s important for us to have Hindi – not only for our 700,000 strong Indian community but also for Australia’s own future in trade and geopolitical stability.”

READ ALSO: I just become myself in Hindi: Ian Woolford

“I worked very hard on the phone, and on social media, to keep pressure on the University and the federal government. I also went to the Victorian Sate Government, DFAT, the Ministers of Education, Home Affairs, Multiculturalism, and other related ministers and Shadow ministers to stop the university ceasing Hindi – a National Strategic priority Language.”

The Indian Student Association of La Trobe and the university’s Bollywood Club also played their part.

They read: “La Trobe University uses their connection to the Indian Film Festival of Melbourne and Bollywood stars to promote the University in India, particularly to potential future students. It is hypocritical (to do this) and at the same time cut Hindi, the language of Bollywood itself. What kind of message will this extraordinary step send to India and the Indian diaspora?”

“It is great news that Hindi will continue,” Priyanshu told Indian Link. “I have first generation migrant friends who are studying Hindi and they were devastated when the move was announced.”

Dr Woolford meanwhile, is showing no signs of slowing down, instead appearing further galvanized in the service of the language which has come to define his life.

“Now that we have support, it is vital to continue to build momentum, and not just at La Trobe but across Australia,” he reflected. “The university sector is devastated by the current crisis and we must consider new initiatives going forward. For instance, I’m looking at ways to work with faculties across the spectrum – Public Health, International Relations, Sociology – to see if there is any way we can design Hindi units to help their students. In Public Health for instance there could be great advantages. How can we make Hindi, a vital community language in Victoria, more attractive to their students? I think it’s a natural thing we should be doing.”

He seems to have passed this enthusiasm on to his students.

Jessica Ellem stated, “I will work alongside Ian to get more students. But the university also has a responsibility. It was perhaps a failure of marketing that people didn’t know about Hindi at La Trobe.”

She added, “Ian is a great teacher, and a great asset to the university. It would have been a shame to lose him and the program.”

One of Ian’s jobs on his to-do list for today includes writing messages of thanks to various people who supported his campaign.

“There are hundreds of people to thank, people who took it upon themselves to do their bit. I just know the first 150.”

We can’t let Ian go without asking him this: with Hindi safe at La Trobe, is there a line or two from poetry that describes his current state of mind?