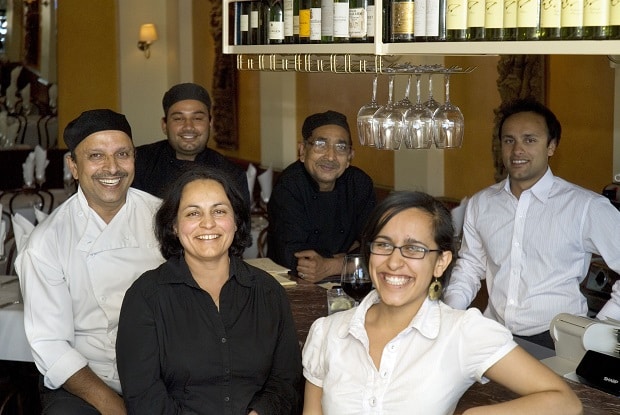 Tulsi, an Indian restaurant on the Mornington Peninsula, has received the distinguished Victorian Award of Excellence 2014 by Savour Australia Restaurant & Catering HOSTplus Awards for Excellence.

Situated in the picturesque town of Somerville, close to Mornington, Mt Eliza, Mt Martha and Frankston, Tulsi offers a gourmet escape into India’s rich culinary heritage. A family-run restaurant by Devendra and Sashi Singh, Tulsi offers a unique dining experience in an elegant setting, where modern India meets classic French bistro, much like the film The Hundred Foot Journey!

A native of Lucknow, Uttar Pradesh, Devendra’s culinary journey began with a stint at Clarks, Avadh after gaining a degree in Hotel Management. He moved to Australia in 1982 and by 1984, had set up his first restaurant, Siddhartha in Frankston. Keen to showcase his country’s food and open up the market for Indian cuisine, Devendra strategically opened Siddhartha to be the first Indian restaurant on the Mornington Peninsula.

Tulsi (named after the Holy Basil, a herb revered by Indians) opened its doors in 2004, and since then there has been no looking back.

Devendra and his team are thrilled beyond measure at receiving the award.

“We feel very proud and honoured to have won this award,” Devendra said. “There were many strong Indian restaurants in the field and it is always humbling to be acknowledged by the industry.”

“At Tulsi, it is very much a team effort and this award is really a testament to their hard work and commitment during the year. It is this consistency that has enabled us to be recognised a number of times as state and regional winners over the last ten years,” he added.

Not an easy award to take home, the judging committee focuses on four key areas to evaluate the restaurants. These include quality, presentation and style of the cuisine, quality of the beverage list, customer service and atmosphere and ambience of the whole dining experience.

“These criteria are quite detailed and allow restaurants to be judged in quite a holistic way,” Devendra continued. “The judges are usually food critics, or industry professionals, who will dine at a restaurant anonymously in a prescribed three month window. As such, you never really know when you are being judged.”

So, what makes Tulsi the best Indian restaurant in Victoria?

“Two key focus areas for us have been creating a menu based on sourcing the best local produce, some produce is from our own biodynamic farm, and ensuring the whole dining experience is consistent, from the cuisine, to the service to the ambience. Also we believe in constantly evolving and challenging ourselves to improve, I think there are always things we can do better,” Devendra said.

Tulsi is a perfect representation of showcasing regional Indian cuisine in an Australian setting. The restaurant boasts an extensive wine list featuring wines from the Mornington Peninsula and also wines from Devendra’s own vineyard.

But when it comes to the wines, it is Sashi who is the pro!

“My interest in farming, coupled with the exposure to great local wine during the 90s, culminated in the purchase of our own vineyard in 1998,” Devendra said. “Since that time my wife, Sashi, who has a background in Chemistry, completed her double degree in Wine-science and Viticulture and has really been the driving force behind the wine label, Avani, and runs both the vineyard and winery. She has worked for many years with Phillip Jones of Bass Phillips and has been making wine since 2009.”

Tulsi hosts several dinners throughout the year where a special Indian degustation menu is created and matched perfectly with Avani wines.

Pairing wines with Indian food is a challenge for many of us – especially while hosting parties at home. Here are a few tips from the wine connoisseur himself.

“With stronger curries, such as a lamb roganjosh, we often find that a cool climate shiraz, or syrah, pairs quite well. The structured acidity of such wines carries and compliments the flavours in such curries. With more medium bodied curries, such as seafood or paneer, we find that aromatic rieslings and chardonnays pair quite well. Again, the sweet fruit and acidity of these wines make them ideal for spicier foods.”

Traditional dishes picked from the length and breadth of India, Tulsi showcases Indian food at its best. But Devendra has his clear favourites, which include the Tandoori Champ (rack of lamb), the samosas and the Jheenga Nariyal (a South Indian inspired coconut milk based prawn curry).

And no mention of Tulsi would be complete without a few words about the head chef, Bhagwati Prasad. Born in Gonda (Uttar Pradesh), Bhagwati began his career in Lucknow and has been working with Devendra for the past thirty years.

“He has worked in various five star hotels in Mumbai, Patna and Lucknow, and joined us in Australia in 1985, focusing primarily on Tandoori and Mughlai cuisine. His outstanding contribution and influence on the cuisine at Tulsi is a large part of our continued success.”