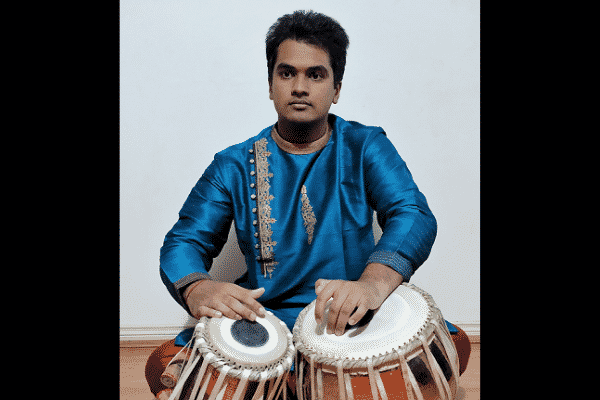 “I was not expecting to get a perfect store – only one other student has got it, I believe,” the Melbourne High School student told Indian Link.

Sankeert took to the tabla at 8 years of age, inspired by a friend who played, learning under Melbourne-based musician Pt. Ajit Nimbkar.

Two years ago, musicologist Dr Sam Evans began guiding him for the VCE.

Sankeert took his Tabla VCE as a Year 11 student, and will complete the rest of his VCE subjects in 2021.

VCE Tabla has an investigative as well as a performance element, Sankeert described. For the investigative, he wrote a paper comparing tabla representations in classical style and in the modern context (in jazz or world music).

“For my final performance, required to be 20-25 minutes, I picked four pieces – a table solo in teen taal, a jugalbandi with sitar, Five Trains by Sam Evans, and Farha by Dhafer Youssef.”

It was not however his favourite piece in the performance. That position is reserved for the jugalbandi with sitarist Denis Phelan. He confessed, “I do prefer the traditional approach – it is more structured. It is only recently I’ve been introduced to modern music.”

The young student, who counts Pt Zakir Hussain and Pt Anindo Chatterjee as his great influences, will soon present at Top Class, the VCE showcase where the state’s top performing arts students strut their stuff.

No doubt he will wear his brightest kurta, like he did for his final exam.

His teacher Sam Evans will probably be there to see him. “It is a prestigious event, and amidst the piano players and the opera singers and the string quartets, it will be beautiful to see a traditional Indian instrument,” Dr Evans told Indian Link. “I think it speaks volumes for the diversity in Victoria that Indian music is accepted and valued.”

Guru is quite pleased with his shishya. “Sankeert did a really great job. He worked very hard, especially in the last six months. In the last few weeks I was actually going, wow!”

Dr Evans, who received Australia’s first doctorate in tabla studies in 2018 from Monash University, saw three students through the VCE this year.

VCE Tabla is a program for which he can take credit entirely. The only one of its kind in the country, Dr Evans launched it in 2009.

“I worked with the board of education to have it recognised – they were very open to having a non-Western instrument in the curriculum. It’s definitely possible to do this in other states. It’ll just take someone to do the job I did – contact your education board.”

The VCE has seen at least one tabla student through every year since it began to be offered as a course of study – there are three kids this year, and two the next.

Dr Evans’ only beef is that tabla is still called an ‘alternate instrument’. “At what stage do we stop calling it that? It’s just an instrument!”

How would he advise students wishing to take up the tabla in Year 12?

“I’d say to them, this is an opportunity to use the skills you’ve gained since your childhood, towards your university entrance score. Mainstream kids who may have learned a western instrument for long, can make a VCE subject out of it, but Indian-origin kids who have learned an Indian instrument were not able to do so until now. I’d also suggest, do it like Sankeert – he finished it in Year 11, and that too with a perfect score, so it should set him up well for his final result.”

We cannot let Dr Evans go without asking him this: how important is the tabla in world music?

“Very important: this was the subject of my PhD. It is readily accepted, and easily collaborates with other instruments. In pitch, tonality and rhythm, it translates well.  It can take on harmonic and melodic roles. It is at the forefront of eastern instruments accepted in world music today.”

For more info check out MelbourneTablaSchool.com.

READ ALSO: Why I chose Hindi for my HSC and why you should too