Melbourne-based musicologist drums up support for an ancient musical tradition 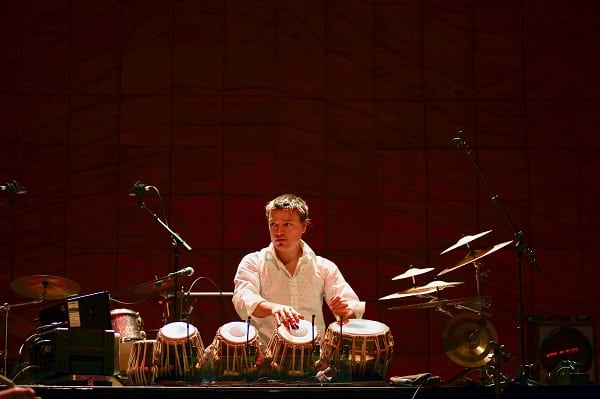 When Sam Evans first encountered the tabla in India, he claims it blew him away.

“I always played drum kits as a child, and at about 18, I began to study the drumming traditions of other cultures,” he told Indian Link. “I travelled to Europe and Africa, and when I spent six months in India I found the tabla. It had much greater repertoire, a greater level of complexity compared to other traditions. It was far more sophisticated and played in such a musical way. It was wildly different from anything I’d played before.”

Today, as a contemporary musician and musicologist, Sam Evans has just been awarded a PhD by Monash University for his innovative performance research on the tabla. Completed with the prestigious Sir James McNeil Scholarship, it is the first performance-based doctorate in Australia on an Indian instrument.

“Traditionally, PhD research was a purely written pursuit, but now doctorates can include significant performance components,” Evans said. “The performance aspect is perfect for music PhDs – the final outcome is writing as well as composition and performance at the doctorate level.”

For Evans, who has always been fascinated by the world of percussion, this achievement marks yet another milestone in an unusual odyssey that crisscrossed many continents, ultimately finding true purpose in India. A regular international performer of traditional Indian music and contemporary world genres, the composer, educator and researcher has ever since been working tirelessly to showcase Indian musical instruments on the Australian stage.

To this end, he established the Melbourne Tabla School, which now boasts of numerous accomplished students from a range of ethnic backgrounds.

“As an Australian tabla player, much of my work has centred on integrating the tabla in the musical culture here in Australia,” the Melbourne based artiste, who teaches at numerous educational institutions, stated.

“I wanted my PhD research to reflect that. In doing so, my research considered the role of the tabla in contemporary intercultural music. It looked at the musical conventions present in world music and devised ways in which the tabla could be integrated within those conventions. That required the creation of a new repertoire for the tabla that included musical elements that are not accounted for in the traditional repertoire, such as harmonic function. As performance-based research the final portfolio produced CD recordings and musical scores that document the practical application of the theoretical components contained in the thesis,” he explained.

The performance component has been released as a CD titled The Tabla Project and is available via iTunes and Bandcamp. Displaying skill and expertise, the album demonstrates the variety of ways in which the tabla can be incorporated into contemporary music ensembles that include Eastern and Western instruments.

Evans enthused, “It’s an exciting time, where we are moving beyond theory only. You can now do a Bachelors or a Masters or a PhD on how to play music rather than just theorising.”

Renowned for cross-cultural collaborations, he has effortlessly combined rustic and modern influences to create a distinctive musical approach.

Over the past decade, Evans has divided his time between Australia and India, performing concerts as soloist and accompanist.

It helps also that he felt drawn to Indian culture from early on. “I was vegetarian, I loved Indian mythology – there were lots of things that attracted me to India.”

Given he does his bols so well, has he picked up the language as well?

“My Bengali was not bad – I learnt it to an ok level, I’d say, enough to get by. And then I tried Hindi, and could not pick it up at all. It’s been one of my regrets, not gaining fluency in Bengali. I should have stuck to it and not gone towards Hindi!”

His forays in the international scene have been largely possible through generous funding grants from the Australia Council for the Arts, the Ian Potter Foundation and Monash University, including the prestigious Sir James McNeil Scholarship.

In true guru shishya parampara, Evans has dedicated his life to passing on the rich legacy he imbibed from Pandit Anindo Chatterjee.

At first in India, he learnt from anyone who would teach him as a beginner, and then with some experience under his belt, he reached out to Pt Anindo.  “When I first saw him play, I thought the sound was incredible, the speed was amazing, and the depth of knowledge simply astounding,” he recalled.

He has since inspired many youngsters to learn the tabla. Tapping into Melbourne’s vibrant cultural scene, he wants Australians, young and old, to share his passion.

Back in 2011, Evans was instrumental in tabla being included as part of the VCE curriculum. “Now young tabla players perform traditional tabla for the final high school exams, which contributes to their university entrance score,” he pointed out. “It’s the only Indian instrument in the VCE course of study alongside other western instruments. About ten students have been through it and almost all have got high distinctions so it ranks really well. One student actually stood second in the state in music.”

He has big hopes for this to pick up. Not only is he thinking of past students as assessors, but hopes to see the instrument at the school level in other states as well.

Perceiving himself as a conduit between eastern and western musical frameworks, Evans has successfully combined his skills as both performer and educator to establish a pathway for musicians playing Indian instruments, such as the tabla and the sitar, to earn performance degrees at university level in Australia.

“It’s great to see Indian instruments accepted in our formal education systems these days, it’s now becoming representative of the society we live in,” he explained. His goal is now to set up a South Asian orchestra.

In fact, Evans has been fascinated by the rich diversity of Indian culture, with its deep grounding in performing arts. Evans believes there is a bright future for students of Indian music in Australia as the landscape undergoes a radical shift.

Meanwhile, the Melbourne Tabla School will celebrate a unique milestone of its own shortly, as it completes a decade of existence.

Today the school has a presence in different suburbs, and boasts some 60 students.
“About 60% have a South Asian heritage and others are western musicians,” Evans revealed. “It presents a beautiful picture of who we are in contemporary Victoria, really.”

What about girl students? “Of course we are reaching out to the girls. There’s always been a minimum 25-30% participation by women, and one year it was up to 40%. It’s much higher than that in India. They learn just the same as the men really, so there’s no reason why they shouldn’t take up the tabla. In fact, of the handful of my students who are currently performing at the professional level, two are women.”

As he prepares his students for the big day at the Abbotsford Convent, Evans could not be prouder. He will also perform at the upcoming Diwali Festival at Federation Square.