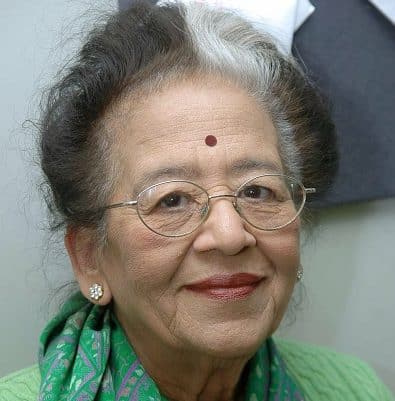 Reading Time: 3 minutesShe was inspirational when she lived and unforgettable as she rests in peace. Melbournians mourn the loss of their favourite ‘Auntyji’, Krishna Arora, who took her last breath on 26 February morning, passing away peacefully.
She had just celebrated her 90th birthday earlier this month in true Krishna aunty style, singing, dancing and meeting her friends and family.
People who were fortunate to have their lives touched by this inspirational lady learned many valuable lessons from her. She always believed that you are never too old to set another goal or to dream a new dream. And she lived by those words.

As a community stalwart, food enthusiast and former Principal of the Pusa Institute of Hotel Management, Arora’s popularity within the community knew no barriers.
She was awarded the Order of Australia Medal (OAM) in 2013 and became the first Indian woman to be honoured with the Shilling Wall Tribute award by the multicultural commission of Victoria for her outstanding contribution to the community.
Born in Bangalore, Arora was the co-founder of the Indian Senior Citizens Association (ISCA) and also served on the Executive Committee of Federation of Indian Associations of Victoria (FIAV) as a representative of the Sangam community organisation.
She was the Founder and Principal of the Pusa Institute of Hotel Management in Delhi before retiring and migrating to Australia. Arora authored several cookbooks and contributed a regular food column in Indian Voice, a local community publication.
Auntyji, as she is fondly called be all, came to Australia in 1992, after retirement, to be with her daughter and her family.
In Melbourne she started afresh by making new friends, volunteering for MECWA and cooking for Meals on Wheels. She taught Asian cooking for two years at the Maribyrnong Community Centre and gave cooking demonstrations at the Immigration Museum, Girls’ Guides and schools.


According to her daughter Rashmi Sharma “Her light will burn on in those she has touched. We, her family – daughter Rashmi, son-in-law Mukesh Sharma, grandchildren Tarika, Hamish, Ritwik and Supritha – are honoured to have been a part of her life. We thank her for teaching us how to really live.”
Relocating to Australia after spending her life in India would have been a challenge for her. “When I came here, I was a pretty lonely person,” she once told Indian Link. “When I moved here I had no friends, nothing.  Someone said to me Australians pass their time by doing community work, which I thought was a great idea. To keep myself busy I started doing volunteer work for MECWA where I worked seven years.”
But still, it wasn’t easy. “Living in Australia was very different from living in India. The Australians seemed to keep to themselves, seldom they smiled or talked to strangers. When using public transport, I did not feel welcome. I felt as if the Australians avoided sitting next to non-whites.
“After living in Australia and getting to know the Australian people, I have changed my opinion and have a greater understanding of their way of life. The Multicultural Policy is one of the best things the Government introduced,” she said.
The 90-year-old from Glen Waverley volunteered with more than 10 community organisations since moving to Australia.
In that time she founded the Indian Senior Citizens Association of Victoria, volunteered at the Malvern Opportunity Shop and been heavily involved in the Flavours of Monash festival.
Arora’s contributions to Monash’s Indian community were recognised with an Order of Australia Medal. She said one of her greatest achievements was being written onto the Queen Victoria Women’s Centre Shilling Wall for her contribution to Indian women’s welfare.
Krishna Arora’s funeral will take place on Monday 5 March 2018, 3:30 pm at Boyd Chapel, Springvale Botanical Cemetery, 600 Princes Hwy, Springvale Vic
- Advertisement -
Share
WhatsApp
Facebook
Twitter
Linkedin
Previous articleRemembering the emperor
Next articleA queen bows out