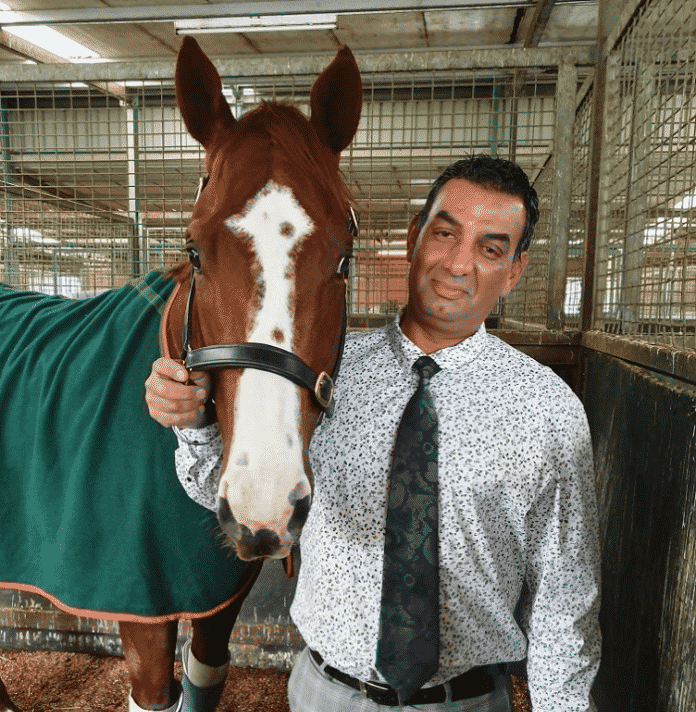 2020 will go down as a memorable year for Cranbourne horse trainer Julius Sandhu, and not only because of COVID.

This year, he scored his first major win in the Melbourne Cup Carnival with his horse Do You Reckon.

It took out the $500,000 Melbourne Cup Carnival Country Final on Oaks Day.

“It was a very rewarding effort,” Julius told Indian Link.  “Not many people gave my horse a chance for that distance, 1600m – but he ran a great race. It was a big deal for us to see him win.”

“My life’s passion is for horses,” he mused.  “They’re magnificent animals. I’m happy to spend most of my day around them.”

A career in racing

Julius Sandhu has been drawn to horses since his teenage years in India, introduced to them by his brother who was a horse trainer. Later he cut his teeth as a trainer under Aris David, one of India’s best-known trainers.

It was in Dubai though that he decided that racing would be his life’s calling, after working under legendary names such as Sheikh Mohammed and his son Sheikh Hamdan, and American thoroughbred trainer Kiaran McLaughlin.

In Australia, he worked briefly in the industry in 1996, then left to establish himself financially. He’s been a certified trainer now for three years.

Julius describes his four and a half years in Dubai as the most important path in his career in racing.

“There’s no betting in racing over there, it is the prize money that is all-important. So, fundamentally, the horses are there for the racing. The trainer’s job is therefore to keep the horses in the best possible shape and condition for racing. They truly care for them, and do the right thing by them.”

In India, on the other hand, the situation is reversed.

“Firstly, the Indian industry is a closed industry – it’s hard to break into it unless you have connections. Secondly, the gambling is a very large part of it; the vast majority of people in racing are there for that purpose, forget about the well-being of the horse. For me, that was a challenge.”

Julius Sandhu is thrilled to win the Melbourne Cup Carnival Country Final with Do You Reckon. pic.twitter.com/FgbyeY5bVA

Luckily for him, Melbourne provided the perfect middle ground.

“Both aspects blend in the industry here. Prize money is good, the betting part is just a bit of fun. It makes it a different experience altogether.”

“Melbourne alone has 35 racecourses, so we have the ability to race every day in different conditions,” he explained. “In between, the horses rest in lush green paddocks.  There’s an expanse of farmland so horses can be horses. My horse Do You Reckon for example, who has been racing for 7 continuous months, is resting now.”

Julius is also a great supporter of women in racing: in his own stable, the most successful rider has been a woman, Alexandra Bryan. “There’s a great influx of girls taking up riding as a profession. At Cranbourne, 30 per cent of the riders are women.”

What is his view though, on the increasing number of accidents in racing?

“Unfortunate accidents can happen in all kinds of racing – boat, car, motorbike, even bicycles. With racing and speed there’s always risk. It’s not ideal that international horses have to be put down. Behind the scenes, there’s plenty of work ongoing to get to the bottom of these accidents. Horses come conditioned to different kinds of tracks – tracks in UK and Ireland are softer than ours due to climate. We’re trying to find ways to bring these incidents down – should the horses arrive here earlier to acclimatise to our conditions, for instance? We’re trying to focus on the best possible solutions for horses and for all other participants – trainers, jockeys, and fans, because everybody is impacted. Don’t forget, racing is a vibrant industry that held up well even with COVID. It employs 300,000 people and contributes greatly to the economy.”

Regarding his own plans, Julius sees Do You Reckon – a career highlight so far – as the start of many things.

“I’m now looking to grow my stables. We have 23 horses so far, and I’d like to take that number to 30-35. If there’s anyone out there keen to get involved, in an ownership perspective perhaps, get in touch!”