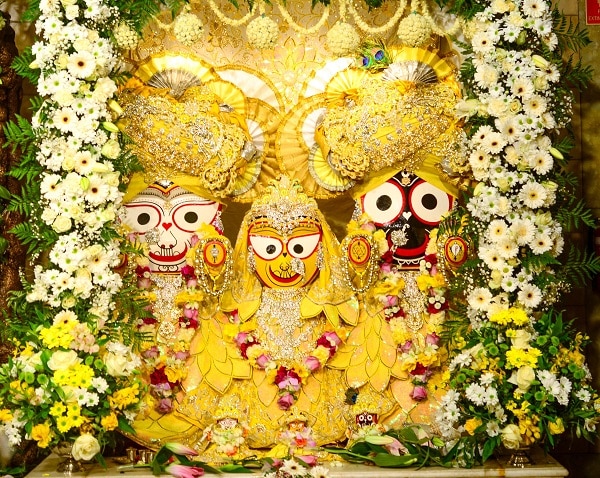 Reading Time: 3 minutesJanmashtami, the birthday of Lord Krishna, is one of the most important days of the Hindu calendar because Krishna is one of most beloved deities in the Hindu pantheon.

On 15 August, even as India celebrated its 71st Independence Day, millions also partook in the festivities of Janmashtami.
The day was celebrated at ISKCON Melbourne with characteristic revelry and festivity. The event commenced with a beautiful darshan of Radha and Krishna idols, decorated in exquisitely embroidered garments and fine jewellery. The program included Maha Abhishek (sanctified bathing of the idols) and fire ceremony, followed by a cultural program and prasadam distribution.
Devotees of all ages participated with enthusiasm and grand vigour in the celebrations. The program was a manifestation of Krishna consciousness in all forms of creativity. Devotees performed various dances, dramas, devotional songs and dances to show their love towards the Lord.

All forms of creative expression were strung together like beads of japa mala, by the thread of faith and worship.

The event was an embodiment and expression of devotion in various forms, from music and dance to ancient literature and food.

It was endearing to see students of Bhakta Prahalada perform various dance dramas enthusiastically. The theme of the dance dramas was diverse. Subjects ranged from Sakshi Gopala, Jagai Madhai to the theme of Dashavatar and life, and the preachings of ISKCON founder Swami Prabhupada.
The bhajans sung during the occasion by Mahathi (Mukunda) and Jaya Janardhana, Radha Sammeta Krishna by Raagaamrutha Music School and Krishna Murari song by ISKCON Melbourne youth mesmerized one and all.
Dances ranging from classical to fusion were also some of the highlights of the event, that began with an enthralling Bharatnatyam dance by Ria and Shreya. It was followed up with Odissi by Shreya Rath on the pastimes of Lord Krishna.

The Mukunda semi-classical dance and Alarippu classical dance by Kalabhavan Academy also drew applause from the devotees. Radhe Govinda by Nrithyopasana group and the classical fusion dance on Lord Krishna and Meera by Ananda group wowed everyone in the crowd.

Prasadam included halwa (semolina pudding), rice, mixed vegetable sambar and herbal tea which was served to the devotees in a marquee in the evening. This feast was cooked in the brand new high-tech kitchen, which was constructed thanks to a $500,000 grant from the government along with the generous donations of the entire community.
This kitchen distributes over 25,000 weekly lunches at free or reduced cost to the hungry and needy of Melbourne.