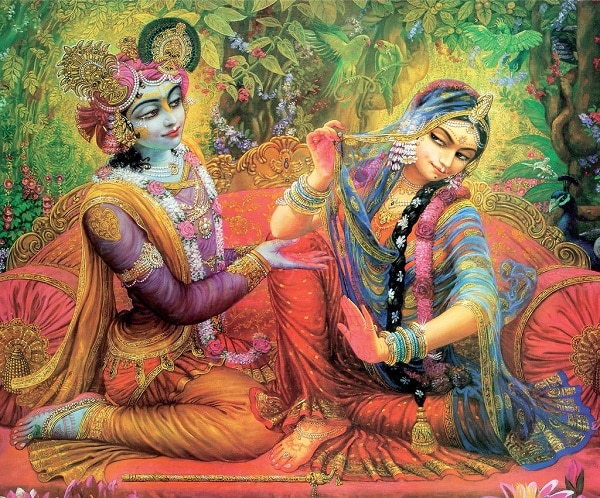 Don’t touch my body in the road, Shyam.
Lover, let me go fetch water.
My mother-in-law and sister-in-law will hear of this;
why do you frighten my heart?
One thing is that you have taken my company;
the other that you keep touching me.
The water-pot on my head shakes.
Why do you take my hand?
(Translated by Lalita du Perron, Hindi Poetry in a Musical Genre: Thumri Lyrics)
This is an example of thumri, a genre of North Indian musical poetry. The speaker is a woman fetching water. Her addressee is, of course, Shyam, ‘the dark one’, a well-known epithet of the Lord Krishna.
If you were to delete the reference to ‘Shyam’, however, these lyrics could be viewed in a far less than charming light.
The woman’s body is being touched, and her hand taken, even as she asks the man to stop, to leave her alone. She is frightened and defenceless.
Delete the references to divinity, and she is being sexually harassed.
In her recent seminar at Monash University’s Sir Zelman Cowen School of Music, Dr Lalita Du Perron, Associate Director of the Centre for South Asia at the University of Wisconsin-Madison, explored the connections between the colonial sanitisation of the thumri genre, Krishna mythology and ‘eve-teasing’ – the harassment of women by men in public spaces – in North India.


Du Perron described thumri as “the quintessential courtesan song,” which changed from a danced to a solely vocal genre during the nationalist movement in colonial India, and was “desexualised” and “devotionalised” in the process.
“Tawaifs – public women singing about harassment in public spaces – were replaced by middle class non-hereditary and thus non-public singers, describing their own private relationship with the god Krishna, no longer molester and always divine.”
Du Perron pointed out that, while eve-teasing is condemned as unacceptable today, sexual harassment remains “incredibly common” in North India, her field of enquiry.
“So how is something that everyone considers unacceptable acceptable?”
She argued that “the archetype of the infantalised divine prankster – the god Krishna – whose amorous overtures are always secretly pleasing to the female recipient, has created a discursive space in which no really never means no…”
As she pointed out, ‘man-made notions’ of harassment “do not extend to divine players such as Krishna.” In the realm of this god, harassment is a part of his divine love play.
As an illustration of this blind spot, she turned to the ‘Anti-Romeo Squads’ set up earlier this year by Yogi Adityanath, Chief Minister of Uttar Pradesh (which happens to be Krishna’s birthplace). Among criticism of the squads was a tweet by senior lawyer Prashant Bhushan:
Romeo loved just one lady, while Krishna was a legendary eve teaser. Would Adityanath have the guts to call his vigilantes anti-Krishna squads?
Bhushan later retracted the tweet, amid death threats and the outcries of outraged Krishna devotees, for being “inappropriately phrased” and apologised for any offence he may have caused.
“In my view, it is exactly this denial of the licence bestowed on sexual harassment by the stories and songs from the Krishna tradition that makes sexual harassment in North India so complicated,” said Du Perron. “The pro-Romeo Squad voices are clearly unwilling to recognise that Bhushan may have had a point. Because the presence of Krishna, a divine childish quintessential ‘naughty boy’…precludes any real discussion of the problem.”
Dr Du Perron also spoke with candour about the term ‘sexual harassment’, which, she acknowledged, could be seen as “a Western, white, Anglo-Saxon term.” She described how, when speaking on the same subject three years ago at Benares Hindu University, she was surprised and disconcerted to find that it was young women students who “were up in arms” about her take on Krishna and coercion.
“I don’t want to hurt anyone…(but) this needs to be said,” she added.
The experience has, however, had her think of trying to find “a different way” into the subject. She is now working on a sister paper to this one, which examines the question of whether sexual harassment is in fact “a white feminist concept.”
You can understand why young modern Indian women, from a relatively progressive university, might still see red at white feminist criticism of Krishna: after all, women of colour have to constantly deal with the “white saviour” mentality around their agencies and empowerment.
But, as Du Perron said, her perspective is made possible by the thumri texts themselves:
Kanha, I am fed up with you, let go of my sari.
Listen, sir, Bihari, I will abuse you.
Night and day he harasses me, he won’t let me go
on the road to the water-well, friend
Let go sir, let go, sir, don’t lift up the cloth of my veil
‘Binda’, listen, he doesn’t care, and all the women watch.
- Advertisement -
Share
WhatsApp
Facebook
Twitter
Linkedin
Previous articleDead alive
Next articleShare if you agree