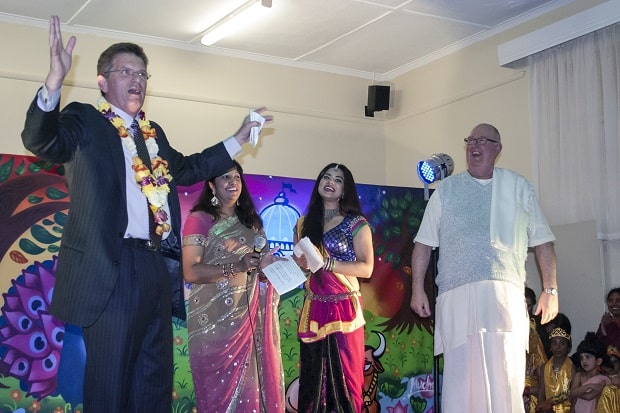 Hare Krishna devotees were delighted to watch former premier Ted Baillieu throw his hands up and chant Hare Rama Hare Krishna along with the congregation at the ISKCON Temple in Albert Park recently. The former Premier was attending the auspicious Krishna Janmashtami, the Hindu festival commemorating the birth of Lord Krishna, along with dignitaries including Craig Ondarchie (MLC and Parliamentary Secretary to the current Premier) and Manjula O’Connor (psychiatrist and founding director of Australasian Centre For Human Rights and Health, ACHRH).

Hundreds of devotees crowded the Melbourne Mahaprabhu Mandir, popularly known as the ISKCON temple, to relish in the ecstatic music and vast array of delicious vegetarian food on offer to celebrate the birth of Lord Krishna. Prayers were offered to Lord Krishna in various ways from chanting mantras, reading the religious scripture Bhagvad Gita and singing bhajans. Many devotees also observed fasting through the day to celebrate the auspicious occasion.

ISKCON, the International Society for Krishna Consciousness, was formed to spread the practice of bhakti yoga and is dedicated to the teachings of Lord Krishna with the aim to build a peaceful, enlightened and just society.

In Melbourne the ISKCON society also operates centres like the Crossways, Gopal’s Restaurant and the Hare Krishna Valley, a 250-acre rural community and retreat for the members of the Hare Krishna movement. Their activities include imparting education on Krishna consciousness, conducting regular Street Sankirtans (chanting on the streets), Food For Life and celebrating festivals based on the Vaishnava calendar with Krishna Janamashtmi forming one of the largest and most popular celebrations.

The ISKCON temple wore a festive look and reverberated with Vedic hymns as the deities were decked out in colourful arrangements and adorned with flowers. The temple in Melbourne is presided over by the deities of Sri Sri Radha Ballabha and Sri Sri Gaura-Nitai, along with Lord Jagannath, Lord Baladeva and Lady Subhadra. Security was stepped up for the occasion and volunteers and temple staff ensured that the ritualistic observations were conducted in an orderly manner.

“I no longer have the ‘cheque signing hand’, however I hope that those who do are able to donate generously towards the temple,” he said.

Craig Ondarchie praised the efforts of the temple staff and disciples in holding the massive celebrations and wished everyone a Happy Janamashtami.

Several plays and dramas were held enacting the various phases and leelas of Lord Krishna’s life. Decked in colourful costumes, children enacted the Akshaypatra (inexhaustible vessel) excerpt from the Sanskrit epic Mahabharata. The main hall where the cultural programme was being held was packed to capacity.

Speaking on the occasion, Temple President Aniruddha Prabhu said, “Lord Krishna’s life is an inspiring lesson relevant even today. Whether it is Lord Krishna’s young days in Gokul, his romance with Radha or the assassination of Kans, every aspect of Lord Krishna’s life is captivating and it is wonderful to see our children enact these on stage. The children are the true disciples of the lord. Wishing everyone Happy Janmashtami, Jai Shri Krishna”.