He’s still got it! Dharmendra comes to Melbourne

An evening with 'Garam Dharam' thrilled fans of the yesteryear megastar 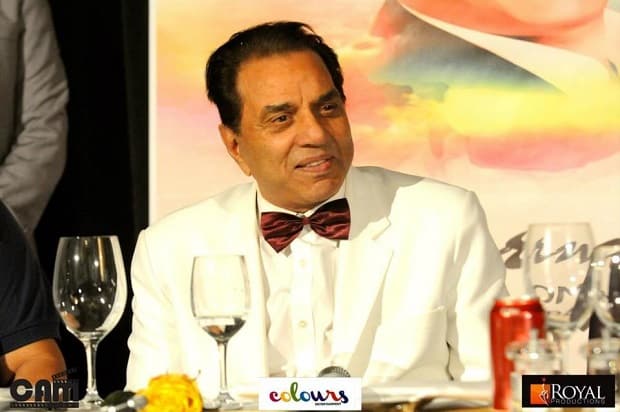 Famous for action as much as romance, multiple award-winning actor Dharmendra was in Melbourne recently to promote his upcoming Punjabi film Double Di Trouble.

The promise of an evening with the yesteryear megastar was enough to send away the winter chill for the hundreds of fans who gathered at Thornbury Theatre to meet the silver screen hero.

The actor, who is considered to be one of the few living legends of the Indian film industry, arrived amidst great fanfare with a red carpet welcome, flowers strewn on his path and nearly 350 guests waiting for him.

In a marked contrast to his starry presence, his wife Prakash Kaur, who also attended the dinner, maintained a low profile throughout the evening. Dharmendra married her when he was 19 and together they have two sons, Sunny Deol and Bobby Deol, and two daughters, Ajeeta and Vijeeta Deol. From his second marriage to renowned actress Hema Malini he has two daughters, Esha and Ahana Deol.

At 79, Dharmendra has lost none of his easy charm and dashing good looks. He had radiating presence on stage in a dapper white suit. He answered questions posed to him with effortless candour, and easily won the audience over with his admirable sense of humour.

Admitting to be a true “Punjabi by nature,” Dharmendra claimed that he would continue to work till he dies.

“Since my childhood days in the village of Sahnewal near Ludhiana to my journey to stardom in Mumbai, films have always been an integral part of my world and I shall go on working till I can,” he said with a smile that can still light up a room.

In a career spanning over 50 years, Dharmendra has acted in many films but it was his role in the cult classic Sholay that won him the most popularity and the heart of his dream girl Hema Malini. Other notable films include Phool aur Pathar, Bandini, Anupama, Chupke Chupke, Yadon Ki Baarat, and Resham Ki Dori.

His on-screen friendship with Amitabh Bachchan resulted in a successful pairing for nearly 19 more films together. Asked about his real life friendship with Amitabh Bachchan, he replied that while they are good friends and they hold each other in great esteem they are different mainly because Amitabh never drinks and never talks too much. “I have tried for years to make him open up but I guess that is not going to happen in my lifetime,” Dharmendra said with a degree of candour.

He admitted frankly that he did not think much of the sequel to his film Yamla Pagla Deewana and had no intentions of completing a trilogy at this stage. As for rejoining politics again he said tongue-in-cheek, “Let me become a good actor first then I will become a good politician”. (Dharmendra was elected as a member of the Lok Sabha in India from Bikaner Constituency in Rajasthan in 2004).

Dharmendra said he was not averse to his grandsons joining the industry that has given his family so much. “They are being groomed and still at a learning stage and they will make their debut when they are ready,” he said when asked if his grandsons will also be seen on screen in the near future.

READ ALSO: From the archives: Big B in Brisbane