Goa in our hearts

The ghumot is alive and well and living in Oz! 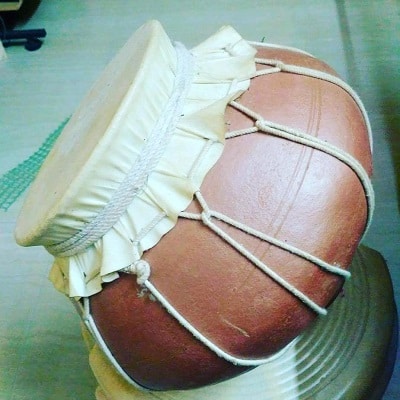 The Goan diaspora in Victoria recently celebrated Goenkarponn – an event marking Goan culture and heritage through food, music and dance.
The sell-out event organised by the Goan Association of Australia Inc, was held at the Dandenong Senior Citizens centre.
‘Goenkarponn’ is the Konkani word for ‘being Goan’.

Celebration of this event was aligned with the Global Goan Association’s theme to promote the traditional musical instrument, the ghumot, indigenous to the state of Goa.
The ghumot is a membranophone percussion instrument consisting of an earthen vessel, in the shape of a pot, having both sides open. On the larger opening a drum membrane is tied taut around it. In the old days, it was mounted by a membrane made of the skin of a monitor lizard. Now, with the banning of the use of the skin of the lizard since it has been classified as an endangered species, more innovative methods have emerged. Goat skin is now more frequently used, as well as artificial membranes made from synthetic materials. The sounds of the ghumot are manipulated by the opening and closing of the smaller hole with the palm of the one hand while the membrane around the larger opening is delicately struck with the other hand to produce the sound.

The ghumot has been found to be used along the Konkan coast besides places like Goa, at places like Karwar and neighbouring villages of Karnataka. It also has a strong presence amongst the East Indian community at Vasai and Bandra in Mumbai. There is also the presence of the instrument found as far as Andhra Pradesh and Telangana where it is known as gummeta.
(Abridged text version taken from Colin Savio Coelho, musician)
The instrument made an appearance on the night, played by percussionist Arnaldo Afonso, as he joined fellow musicians Josephato Vales and Cyrus in entertaining the crowd.

Earlier, the President of the GAA Gerard Lobo delivered a welcome address.
Members prepared a sumptuous Goan lunch for the occasion: it included par boiled rice, dry prawn flavoured curry, veggies and fried fish.
The members then enjoyed a Bingo session, which was followed by singing the mandos and dulpods by all present. Mandos, of course, are Goa’s wonderful fusion of eastern and western music traditions, and dulpods are dance songs with a swift rhythm and themes from everyday Goan life. Who could stop the crowds from getting on the dance floor after these!

We hope the Goan traditions of music and dance, and its wonderful cuisine continue to live on in the hearts of Goan-origin Australians.