Diwali gets warm response on a wet day in Dandenong

With plenty of peppy Bollywood dance, plenty of colourful costumes and some lip-smacking street food, it was a showcase of the best of India 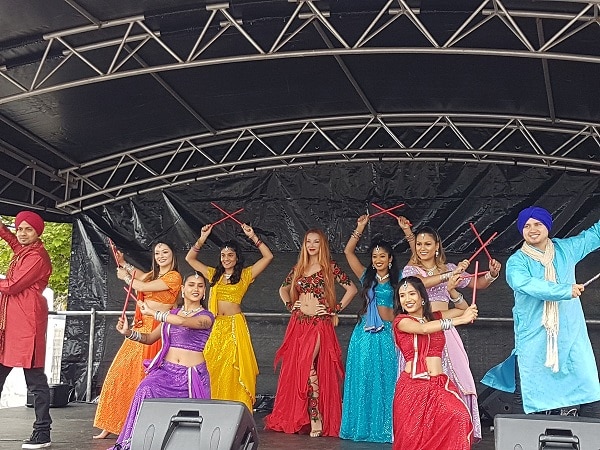 A rainy day could not dampen the spirits of the close to 1,000 visitors at the Diwali fair held at Dandenong Market on 22 October.
With plenty of peppy Bollywood dance, plenty of colourful costumes and some lip-smacking street food, it was a showcase of the best of India. Activities such as free henna art and turban tying gave the non-Indians a quick primer into Indian culture.
Indian Link was associated with the event.
The parking lot of Dandenong Market wore a decidedly festive look as stalls popped up and a stage was put in place for the fair. By mid-morning, a mixed crowd of shoppers and actual visitors started building up.

Upbeat Bollywood numbers built up the festive mood as several groups performed on popular songs, much to the delight of those gathered. For some enthusiastic visitors, the foot-tapping songs were too good not to shake a leg and they broke into impromptu jigs close to the stage. There were a couple of drizzles but who doesn’t like a bit of rain dance in any case!

The performers included Sikandar, Bollydazzlers, RANJHE, Tiya Dance Troupe and The Fifths.
Meanwhile, wafting aromas from the food stalls lured the visitors with kebabs, vada pav, dosa, biryani, curries and more. Those in the mood to indulge could dig into kulfis and mithais as well, and a warm cup of chai was just the thing to have on the overcast day.

It was heartening to see a good crowd at the henna art and turban tying stalls. What better way to partake of a rich culture while having some fun along the way! After all, isn’t that what Diwali is all about too?