A cracker of a Diwali at Melbourne's Fed Square

Fed Square leads a slew of Diwali celebrations in Melbourne 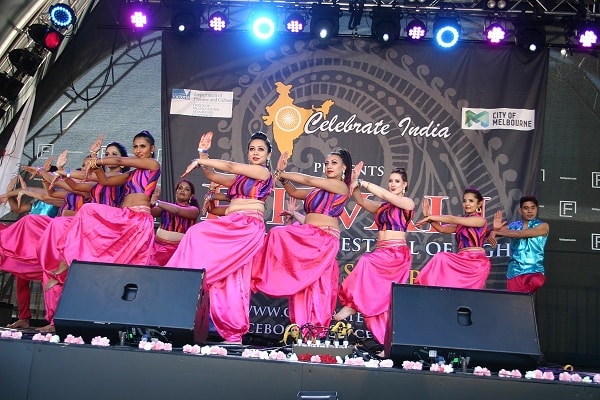 From shedding copious tears on Diwali days and desperately missing the celebrations ‘back home’ to having way too many Diwali celebrations to attend in Melbourne this year, I have a modern dilemma.
Everyone including politicians, banks, local markets, corporates, AFL and other sporting clubs as well as educational institutions are observing this popular Indian festival. Even Uber sent an invite this year. It was great to be spoilt for choice.
This most significant Indian festival has gained such significance in Melbourne city that one really has to have their head in the sand in order to miss it.

Commuters travelling back home after work from Flinders Street station, prior to Diwali, may have felt a tad less weary from watching the colourfully attired Bollywood dancers performing there.
Those who were in Bourke Street Mall that evening would also have heard the upbeat Bollywood beats and seen the vibrant performances and wondered what was going on.
The Indian music from the illuminated Diwali carriage plying the streets of Melbourne would have piqued many people’s curiosity.
Many may have wondered why the Parliament, Old Treasury, Museum and other iconic buildings are illuminated with spectacular lights, that too much before Christmas.
The Melbourne Star Giant wheel was also illuminated in the tricolours of the Indian flag on Diwali and a 40% discount was offered on all tickets to the ride to mark the Festival.

Leading up to Diwali, a 10-day exhibition of Indian folk art and craft, called Colours of Diwali, was also on display at the Fracture Gallery of Federation Square.
Even if one missed out on any or all of these subtleties, they surely would not have missed the tens of thousands of people who gathered at Federation Square to celebrate the Festival of Lights.
Federation Square Diwali is organised by Celebrate India, a not-for-profit organisation that aims to share and develop a better understanding of Indian culture among all Victorians.
Now in its 12th year, this annual festival forms an important part of the Victorian events calendar. The volunteer-run organising committee puts in months of efforts to ensure that the event is bigger and better.

Luckily this year, the weather held up with clear skies, beautiful sunshine and just a slight nip in the air.
The Celebrate India team of volunteers started the prep early as vehicles bumped in and out, depositing their products, points of sale and banners for the Diwali stalls. Food vendors started setting up for what would undoubtedly be a very hectic day.
It was all hustle and bustle as aesthetically decorated traditional Diwali lanterns were strung up to add to the festive colours.
Soon, curious onlookers started trickling in, followed by participants of the morning program of free entertainment. The festivities then warmed up with children’s activities, circus acts, magic show, yoga, meditation and a meet-and-greet with AFL players.
The foot traffic picked up in the afternoon as the food vendors started getting busy along with the other stall holders and henna counters. Ghar ka khana, homemade kulfi, paani puri, chhole bhature, pav bhaji… there was an amazing array of mouth-watering Indian street food and other delicacies on offer.

By the evening, the food queues were enormous and standing space was limited as an overwhelming number of people gathered for one of Melbourne’s largest Diwali celebrations.
According to information provided by Federation Square, approximately 55,000 people visited the prominent location during the festivities.
The Premier, Daniel Andrews, declared to thunderous applause in his speech later that evening, “I think this is not only Australia’s biggest Indian Community but in Victoria we have Australia’s best Indian community.”
He added, “In Victoria, the multicultural capital of our nation, we don’t just tolerate diversity, we celebrate diversity. No community makes a bigger and more profound contribution to our diversity, strength and inclusion than the Indian community with all of its diversity.”
The formal part of the evening saw bipartisan support to the event with the presence of the Victorian Premier, Shadow Multicultural Minister Inga Peulich and Deputy Mayor Arron Wood.
They were all invited on stage to light the traditional lamp along with the Indian High Commissioner Ajay M Gondane and Indian Consul Manika Jain.

Amongst the fireworks and tricoloured confetti that burst on the stage was a cracker of a comment from the Indian High Commissioner. Pointing out his concern for the audience that stood for most part of the evening, he remarked that seating should not be restricted only to the VIPs and dignitaries.
According to the HC, due to the lengthy duration of the event the public should be provided with some arrangement in order to enjoy the event in a more relaxed manner. He requested the organisers to arrange something next year and also offered his assistance, if required, to make it happen.
Needless to say, his words were met with great applause and cheering from the crowd.  Hopefully he will remember his words closer to time, though the logistics of it will be mindboggling considering there were easily several thousand people present at the festival.
During the evening program, audience interest was held by musical treats and some vibrant folk dances from India. The performers were provided with a refreshingly different theme by Celebrate India. The teams rose to the challenge by performing various dance styles of India, with a contemporary twist, based on Bollywood music from the 1960s and 70s.

Arun Sharma, Celebrate India’s Chairman and White Ribbon Ambassador, led the White Ribbon oath ceremony supporting “no violence against women”. This brief ceremony has been an interactive part of every Celebrate India Diwali Celebrations and encourages the community to support the White Ribbon cause.
The audience also enjoyed the novelty of the conch blowing competition. They witnessed a unique collaboration of African and Indian drummers and dancers, led by master drummer and choreographer Frederick Nii Kpakpo Addo from One Spirit Africa.
Another highlight was the fusion of dances by artists from China, Mauritius, Fiji and India. Upbeat bhangra and contemporary Bollywood dances were easily the crowd favourites and were met with hearty applause.
Security was tight and alert during the nine-hour program that concluded with spectacular fireworks on the banks of the River Yarra.
Sharma said, “I believe the celebration of Diwali in the heart of the city plays a significant role not only in helping new migrants to settle in and feel at home but also by generating revenue and social cohesions among the wider community.”
Slowly but surely, the wider community in Australia is getting to know what Diwali is and what it stands for. Speaking to those present revealed how popular the event is amongst Victorians.

Aman Dhillon has been attending this event for the past four years with his entire family. “Rain or shine, we come every year because we really enjoy the food, entertainment and there is always something new to look forward to. This is the best way I can recreate the joy associated with this festival for my children,” he said.
Heena Patel claims she comes to the festival every year with her Anglo Saxon friends so they can also experience a ‘snapshot of Indian Diwali.’  “They love it and look forward to coming with me every year. This year even their siblings joined us and we all had a great time,” she said.

To quote HC Gondane’s words, “Diwali is not just about light over darkness or triumph of good over evil, it is about sharing. So continue to share the spirit of Diwali with your neighbours, colleagues, friends, business partners and the community around you.”
Thanks to all that sharing, I am now off to my Diwali celebration number 5.
- Advertisement -
Share
WhatsApp
Facebook
Twitter
Linkedin
Previous articleINSV Tarini, Indian Navy's 2nd ocean-going sailboat
Next articleAIII’s colourful Diwali celebration in Melbourne