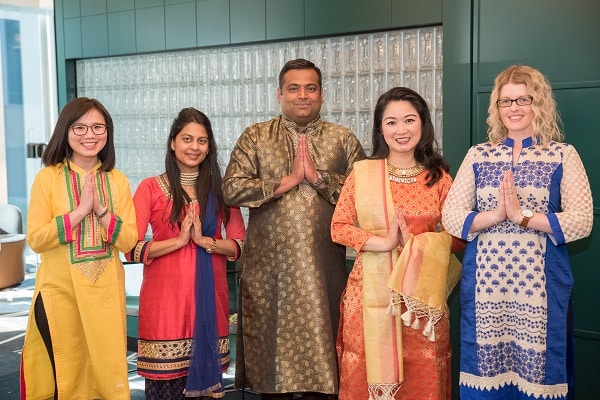 The Bank of Melbourne recently hosted an inaugural cocktail event to celebrate Diwali.
Inclusiveness took centre stage as the colourful evening brought together community leaders, dignitaries, customers and Consulate representatives as part of the Bank’s ongoing support of Victoria’s multicultural diversity. The joyful celebration provided a great opportunity to network as well.
“As Victoria’s local bank, we support the uniqueness of Australia’s many cultures from around the world that are nurtured and celebrated here,” said Huzi Bagasrawala, Business Development Manager, Asian & Migrant Banking.
The bank provided special offers on banking services throughout the Diwali festival and sweet boxes were distributed to selected multicultural branches.
According to Bagasrawala, Bank of Melbourne provides customers with a dedicated relationship manager who is familiar with cultural and language differences and takes the time to understand each customer’s personal banking requirements.

In addition to multilingual ATMs and 24×7 online banking, Bank of Melbourne’s multilingual staff can provide personal support in a customer’s native language, including Hindi, Gujarati, Punjabi, Tamil, Kannada, Tulu, Bengali and English.
The cocktail event was held at the Collins Street-located Bank of Melbourne headquarters that had been transformed to give guests an atmosphere of colours and taste of India.
Several guests and BOM staff arrived in traditional Indian attire and enjoyed the special Indian cultural entertainment on offer.
The mood picked up from the registration desk itself that was decked with flowers, traditional thalis (decorated trays) and vermillion.
Shikha Chhangani from Tatkaar Kathak Academy presented a beautifully executed dance that invoked the special blessings of Lord Ganesha. The quintessential Bollywood flavour was provided by The Jalwa Dance Company as they presented a peppy performance to Bollywood beats.
Michelle Winzer, Chief Executive of Bank of Melbourne, was on hand to welcome the guests, alongside other executives and staff.
Also sharing in the occasion were Jonathan Ayers, Head of Premium Banking and Business Growth and Acting Head of Retail Banking, and Irene Yu, Director of Migrant and Multicultural Banking.
Minister for Multicultural Affairs Robin Scott, Consul General of India in Melbourne Manika Jain, and Consul General of Sri Lanka WGS Prasanna were among the VIPs that attended.
Raj Khillan, who is the Senior Paediatrician with Western and Mercy Health Services and pioneering leader for healthcare in the Indian community, was a guest speaker at the event.
Raj is also the Founder of Doctors against Domestic Violence and he writes columns in various Indian newspapers in Melbourne. He shared his inspiring journey and migrant story with those present.
“Wonderful to celebrate the Diwali festival of light with our customers and colleagues at Bank of Melbourne. A diverse and inclusive community where differences are not just tolerated, but embraced, is vital for a thriving and happy society, and business,” said Winzer as she wished everyone a safe and happy Diwali.
-By Preeti Jabbal